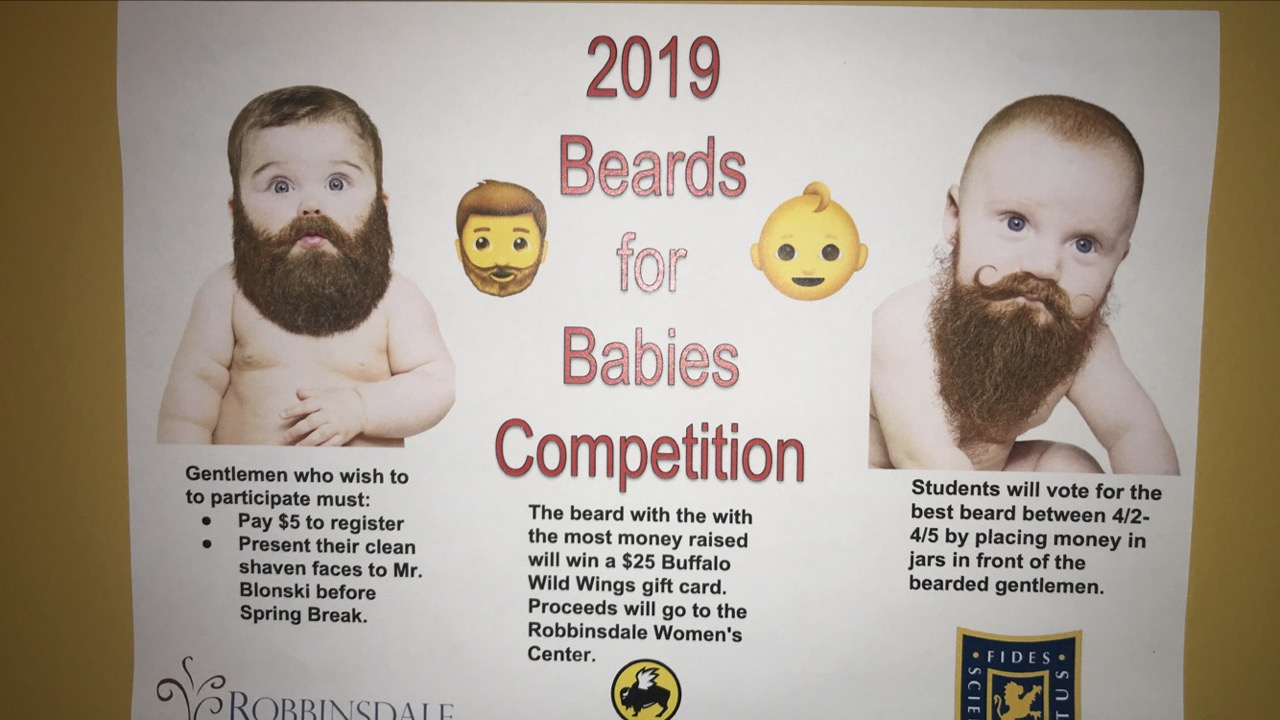 Ladies and gentlemen, spring break is upon us.  After months of hard work and dedication, our two week of respite are about to commence.  Whether catching up on some sleep, sitting on the beach or just hanging out, spring break is a time of freedom.  While it may be depressing to think of the end of spring break, we do have one thing to look forward to about the end of break, and no, it is not the weather.  After spring break, everyone at PA will get to see beards of all those who participated in Beards for Babies.

So, what is Beards for Babies?  Beards for Babies is an annual competition a select few high school students partake in to support the pro-life movement.  While Providence Academy typically holds a strict no beards policy, administration makes an exception for all participating  in this event.

The five dollar entry fee is a small price to pay for the freedom to come to school after break with an unshaven face, and all proceeds benefit the Robbinsdale Women’s Center.  This center gives free pregnancy tests to women and gives pregnant woman information and options so they do not feel pressured into an abortion.  Not only does this contest get money for the women’s center and provide a gift card to the winner, it also is one of the favorite events held by PA.

Many students flock around the upper school office to view the before and after pictures of the contestants and can pay money to support their favorite beard.  The winner gets a 25 dollar gift card to Buffalo Wild Wings, as well as an additional gift certificate from Mrs. Harrington.

Now the 25 dollar question: Who is favored to win?  Last year’s winner Nicholas Simmons has graduated, so there is an opening on the beard throne.  Who will become immortalized in PA beard history?  In talking to many PA students, the runaway favorite is Jacob Clipperton ‘19.  Clipperton, also known as the Ginga Ninja, is famed for his full ginger mane which he believes closely resembles that of his idol, Arthur Morgan.

The biggest threat to Mr. Clipperton comes from his close friend and beard competitor Sam Young ‘19.  Young is known for his curly and unruly summer beards.  He is often seen sporting this beard on the Lacrosse fields, but the pressure will be on him to prove that he can grow a thick enough beard in a short two weeks.

A dark horse candidate for this competition could be none other than PA hockey legend Zachary Giesler ‘19.  Giesler knows he is not likely to grow a fuller beard than his competitors, but the clever senior may have a few tricks up his sleeve.  Giesler stated, “While I obviously cannot grow the best beard, I do believe I can grow the best mustache”.  This infamous mustache has been likened to the late Freddie Mercury’s mustache before.

Regardless of who wins, however, the most important thing is obviously the money being raised for Robbinsdale Women’s center.  It is quite remarkable that Providence has turned something like donating money to a good cause into such a competition that really helps turn attention to the big issue and pique interest.  Be sure to check out the upper school office after break for pictures and vote on your favorite beard!