Every Body Tells a Story Over Half a Century Later, King’s Words Still Echo

Away from Home for the Holidays

By Isabelle Cousineau On December 21, 2018 In Current Highlights, News 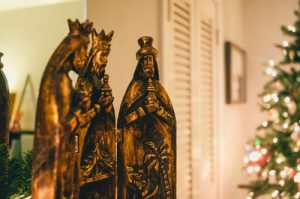 An important Spanish tradition is celebrating the “Three Wise Men” (Epiphany) on January 6 as they represent giving gifts of gold, frankincense and myrrh to Christ.

From cuisine, to culture, to custom, Spain and the United States have many observable differences. Despite this, both countries surprisingly share many similarities. This time of year, Providence Academy’s foreign exchange students may be a little homesick for food or language, but they are finding some of the same comforts of home in our overlapping Christmas traditions.

PA’s foreign exchange students, hailing from the Thomas Aquinas school in Madrid, sophomores María La Pastora and Teresa del Águila are seeing these similarities first hand during their first Christmas away from home. Águila noted, “Spain’s Christmas is pretty similar to American Christmas in that we give presents, put up a tree and decorate it.”  Pastora added, “In my family, we decorate the tree together, add a nativity and an advent [wreath], and pray every night. In advent it is more special because when we pray, we light up a candle from the [wreath], depending on what Sunday it is.” She continued, “For Christmas Eve and Day, we basically gather with close relatives; cousins, aunts, uncles and grandparents and we have a big meal. We also to go to church.”

Even where practices are similar, some of the particulars are distinct. In America, for instance, people normally put presents under the tree on Christmas Eve and open the gifts on Christmas morning. In Spain however, it works slightly differently. La Pastora stated, ”Christmas is about giving presents ‘secretly’ you could say, because on January 5, you go to sleep and when you wake up, the bottom of the tree is filled with presents. Some families do Santa Clause but mainly Spanish families do the 3 wise men which is also known as the Epiphany.  Our Christmas festivities are normally celebrated after New Years.”

While the students are very grateful for their experiences here, both miss their families at home. Luckily, both have plans to visit Spain over Christmas break. As La Pastora reflected,  “I missed my family the first week, but I got used to my host family and started making friends at school. I’m sad to leave Minnesota after first semester but I’m also excited to see my family again. Most of my brothers study abroad too, so Christmas is one of the few times my entire family gets to be together.”  On the other hand, Maria commented “For the first months, I did not miss my family at all; it’s been the past two months that were truly difficult. My family has had several gatherings and I wasn’t there to be with them.”

Living away from home, foreign exchange students are often thankful to catch a glimpse of how similar American celebrations are to their own. If nothing else, time spent learning about other cultures always sheds new light on familiar customs and deepens gratitude for things we may have taken for granted. 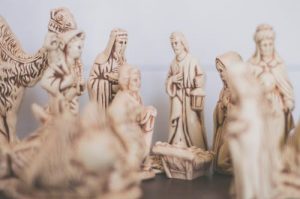 Spain and America share a commonality in preparing the ‘Nativity Scene’ during the Christmas season.