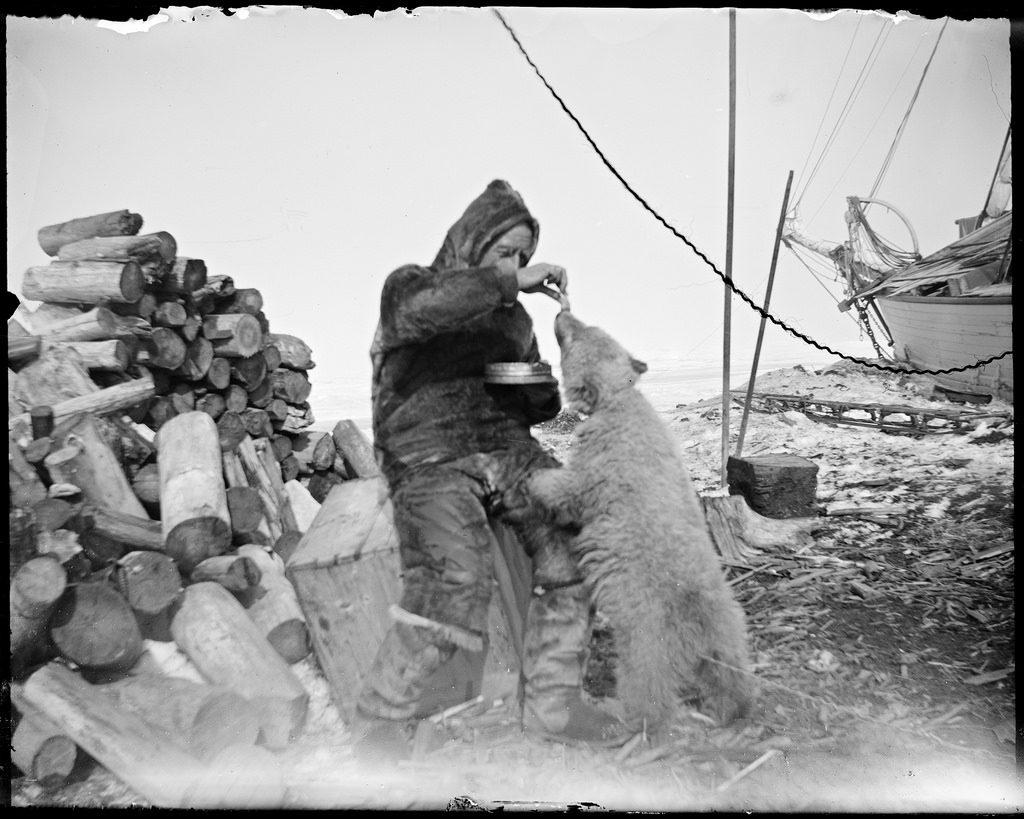 On this day in 1911, Roald Amundsen and his expedition reached the South Pole. Using dog sleds and Inuit methods, the Norwegian explorer beat Englishman Robert Falcon Scott in their Antarctic race, gaining worldwide attention and fame. Few adventurers can match Amundsen’s accomplishments: he is recognized as the first person to reach both poles of the Earth, and he was the first person to lead an expedition traversing the Northwest Passage in the Arctic.

Roald Amundsen, born near Oslo, Norway on July 16, 1872, was already an accomplished explorer by the time he set out for the South Pole. In 1897, Amundsen sailed as first mate on a Belgian expedition: the first to winter in the Antarctic. Locked in

sea ice for months, Amundsen credited the ship’s doctor and his frequent hunting excursions with saving the crew from scurvy. The fresh meat brought back by American Frederick Cook and its ability to prevent or partially treat the disease would serve as an important lesson for Amundsen’s future journeys.

In 1903, Amundsen led the first expedition to successfully travel the Northwest Passage between the Atlantic and the Pacific oceans. Along the journey, they spent two whole winters living on King William Island in northern Canada, learning Arctic survival skills from the local Netsilik Inuit people. This knowledge would prove to be invaluable during Amundsen’s later expedition to the South Pole. Amundsen and his team returned to Oslo in November 1906, after nearly four years abroad.

Amundsen next planned to head for the North Pole. However, he switched targets after Americans Robert Peary and Frederick Cook (the doctor who sailed with Amundsen in 1897) both claimed to have reached the North Pole during two separate expeditions. Amundsen quickly changed course and embarked for the South Pole. He hoped to beat Englishman Robert F. Scott, who was already preparing to sail there. His ship, the Fram, departed in June 1910, and he informed Scott with a telegram: “BEG TO INFORM YOU FRAM PROCEEDING ANTARCTIC–AMUNDSEN.

In Antarctica, Amundsen and his team wore Inuit-style fur skins. These kept warm when wet better than the heavy wool clothing donned by other Antarctic explorers. He also used skis and dog sleds for transportation, as did his Inuit friends, and he planned to kill some of the dogs so that the men would always have some fresh meat. After being delayed by extremely low temperatures, Amundsen and a small group attempted to reach the South Pole with 52 dogs and four sleds. They were able to travel 20 miles a day, and while Scott was burdened by scientific obligations, Amundsen had only one goal: reaching the Pole.

“Science,” he later admitted, “would have to look after itself.” As the expedition wore on, Amundsen wrote that he “had the same feeling that I can remember as a little boy on the night before Christmas Eve—an intense expectation of what was going to happen.” On Dec. 14, the five men, with only 16 dogs left, arrived at 90° 0′ S. Amundsen and his crew set up a tent, a Norwegian flag, and smoked celebratory cigars. They also left a letter stating their accomplishment in the event that they perished before returning to base camp. On January 17, 1912, Scott’s group arrived at the South Pole. After a grueling trek, they were devastated to find that Amundsen’s had reached it first. Scott bemoaned in his diary, “great God! This is an awful place and terrible enough for us to have laboured to it without reward of priority.”

On March 7, 1912, Amundsen publicly announced his success from Australia. When the world learned that Scott and several others in his expedition died attempting to return from the South Pole, many Englishmen hailed him as the true hero. They believed that Amundsen had accomplished this feat in an underhanded way; he had only told Scott and the world of his intentions after he had already left for Antarctica.  Amundsen would continue to explore, ultimately disappearing in 1928 attempting to rescue a fellow explorer in the Arctic.

The extreme outdoorsman attributed much of his success to preparation: “I may say that this is the greatest factor—the way in which the expedition is equipped—the way in which every difficulty is foreseen, and precautions taken for meeting or avoiding it. Victory awaits him who has everything in order—luck, people call it. Defeat is certain for him who has neglected to take the necessary precautions in time; this is called bad luck”.