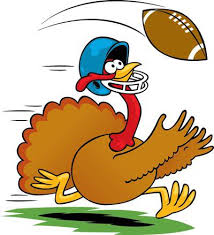 Thanksgiving is all about the three F’s: Family, Food and arguably most important, Football.  Well, perhaps that list is a bit out of order, but watching football is undoubtedly one of the most popular Thanksgiving activities. On the off-chance that you mixed up your priorities and were busy with family or entering into a food coma, now that the gatherings have dispersed and the food is all digested, you may be wondering how your favored teams fared while you enjoyed the festivities.  You are in luck: the PAW has got you covered. Below is a complete summary of all three of the Thanksgiving NFL football games.

Thanksgiving football started early this year, as  NFC North rivals Chicago and Detroit kicked off at 11:30 in the morning.  On paper, this game looked like it would be over before it even started. The Bears have the top-ranked defense in the NFL and are led by their excellent linebacker and possible MVP candidate Khalil Mack.  On top of that, the Lions had allowed six sacks in their earlier meeting against the Bears.  However, there was a small ray of hope: the Bear’s franchise  quarterback –

rising star Mitchell Trubisky – was ruled out of the game due to a shoulder injury.  It was up to  unproven journeyman  Chase Daniel, a nine year veteran and career backup, to get the job done for Chicago.

The game started out slow, with both teams struggling on offense out of the gate.  The Lions struck first  with a 4 yard touchdown run and led the Bears 13 to 9 heading  into the fourth quarter behind two rushing scores from running back LeGarrette Blount.  The dangerous Bears finally decided to awake from their hibernation to slash the Lions, thanks to a touchdown pass from Daniel and a defensive score.  Matthew Stafford did little to help the sluggish Lions attack, throwing a costly pick six to Chicago safety Eddie Jackson that ultimately cost the Lions the game.  Final Score: Bears 23 Lions 16

Game two featured a battle between the top two teams in the  NFC East.  This game had major implications as the winner would grab hold of first place in the division and the inside track to the playoffs  The Redskins were in a tough spot, as their starting quarterback, Alex Smith, had suffered a gruesome leg injury a few weeks before.  It was up to backup Colt McCoy to carry their team.  The Redskins tried to ride their future Hall of Fame running back Adrian Peterson, but he injured his shoulder early on and was unable to run effectively.

The Cowboys took full advantage of Washington’s injuries, combining them with an offensive explosion.  Led by newcomer Amari Cooper ( 8 receptions, 180 yards, 2 touchdowns) and Pro Bowl running back Ezekiel Elliott ( 26 rushes, 121 yards and 1 touchdown) the Cowboys dominated the second half walking away with both the win and the division lead.  Final Score: Cowboys 31 Redskins 23

The third and final game on Thanksgiving pitted two NFC South division foes against each other.  Both teams made the playoffs last year, so before the season this looked like a game to circle on the calendar.  Unfortunately, the Falcons haven’t

taken off yet this year, and are struggling to live up to high expectations.   On the other hand, the Saints are enjoying a 9 game win streak and appear to be  legitimate Super Bowl contenders.  Red-hot quarterback Drew Brees put up impressive numbers while throwing to mostly unheralded receivers, making up for a quiet game by star wide receiver Michael Thomas.  Brees finished with four touchdowns while running back Alvin Kamara finished with 89 yards on  a mere 14 carries.  In the end, the Falcon’s were doomed by their lack of a run game.  The Atlanta’s  leading rusher had only 16 yards, not nearly enough to hang with the prolific offense of New Orleans.  Final Score: Saints 31 Falcons 17

For the most part, this year’s Thanksgiving football lived up to the hype. Two of the three games were determined by one score, and each contest was a tough division battle. Just like the customary meal, there was a little something for everyone – offensive outbursts, defensive slugfests, and a reason to check on your fantasy football team.  If you feel like this year’s menu was missing a little pigskin, it’s not too early to plan next year’s festivities allotting plenty of time to tune in to exciting round of Thanksgiving football.