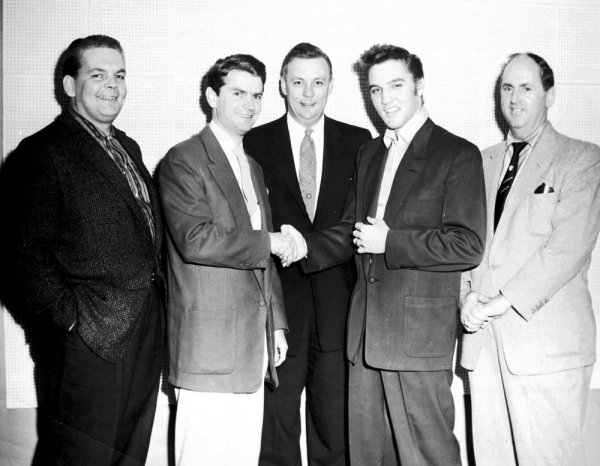 On this day in 1955, RCA-Victor signed Elvis Presley to a recording contract, paying $40,000 to Sun Record Company for his release. The deal, negotiated by special advisor “Colonel” Tom Parker, was record-breaking, amounting to over $375,000 in 2018. Backed by the connections and distribution power of a major label, Presley would soon begin a meteoric rise to international stardom.

The best-selling solo artist in the history of recorded music, Presley came from humble beginnings. The Presleys were a poor family, living in rooming houses and public housing in Memphis. Elvis seemed destined to be a truck driver. Providence Academy teacher and lifelong Elvis fan Brian Dudley recalls speaking with a woman who had gone to school with Presley: “She said that ‘he had had the poorest clothes and that nobody would play with him.’ He was the lonely kid in the corner of the playground.” Still, Presley aimed to one day make a name for himself as a singer.

In August 1953, Presley visited Sun Records and recorded – at his own expense – two songs, hoping to be discovered. One year later, owner Sam Phillips was still looking for a singer who could fuse white country music and black rhythm and blues (R&B). He decided to call Elvis. Late at night on July 5, 1954, Presley found his groove. With Scotty Moore on guitar, Bill Black on bass, and D.J. Fontana on drums, the group recorded Arthur Crudup’s “That’s All Right”.

Upon its release, local radio stations played the song over and over again. In a 1955 article for the Memphis Press-Scimitar, Robert Johnson wrote, “His first record, “That’s All Right” and “Blue Moon of Kentucky,” hit the best-seller lists immediately after release in July of last year and both Billboard and Cashbox, trade journals, named him most promising western-star”. Dudley notes the importance of Presley’s time at Sun: “it was integral; it made him the King of Rock ‘n Roll. The raw combination of folk music, blues, and country really came together to form rock ‘n roll.” A growing sensation, Elvis and his band toured the south, playing at fairs and on radio programs like the Louisiana Hayride.

With regional hits such as “Mystery Train” and a unique blend of rockabilly, blues, and R&B, Presley was outgrowing Sun Records. In addition, the company was in financial trouble. Needing money to back the rest of his artists and overcome mounting debt and operating costs, Phillips considered selling Presley’s contract. In stepped Elvis’s new special advisor, the self-proclaimed “Colonel” Tom Parker. Parker had managed many country singers, and he saw Presley as a potential star. Negotiating on Presley’s behalf, Parker immediately asked Phillips to name his price for the singer’s contract. Phillips demanded $35,000 plus $5,000 to pay back royalties that Sun owed Presley. At the time, this was considered astronomical, more than had ever been paid for a singer. At first, RCA would not offer more than $25,000 for the contract; Parker gave them two weeks, or Presley would sign somewhere else. On November 15 RCA accepted the terms, and the two sides orchestrated a deal.

The sale of Presley’s contract was finalized on November 21st at Sun. Dudley remarked, “to many, [the sale] meant the beginning of Elvis’s commercialization – ‘here comes packaged Elvis’ as opposed to the raw bluesy, R&B, country Elvis. However, this also gave Elvis necessary exposure. To become a big deal, you had to get people to play your records.” Ultimately, this deal would have many long-term effects on Presley’s career. All of the singles he had recorded at Sun Records were included in the sale, and RCA soon re-released them. On the same day, Elvis signed a contract naming Parker his sole manager – a position the Colonel would hold until Presley’s death in 1977 – and a “long-time exclusive writing pact” with Hill and Range, who would control what he recorded until the early 1970s. By 1956 Presley was recording new material for RCA. His debut single, “Heartbreak Hotel,” reached No. 1 on the Billboard Top 100 chart and his first album, Elvis Presley – featuring the hit “Blue Suede Shoes” – topped the charts and became RCA’s first million-selling album by a single artist. Elvis was on his way, primed to ascend to the throne of musical royalty as the King of Rock ‘n Roll.

Dudley concludes, “Elvis represented everything that was good about rock ‘n roll…certainly, rock ‘n roll at its best is so uniquely American, and Elvis harnessed this. It can be said that he gave his life for his country, in a way.”