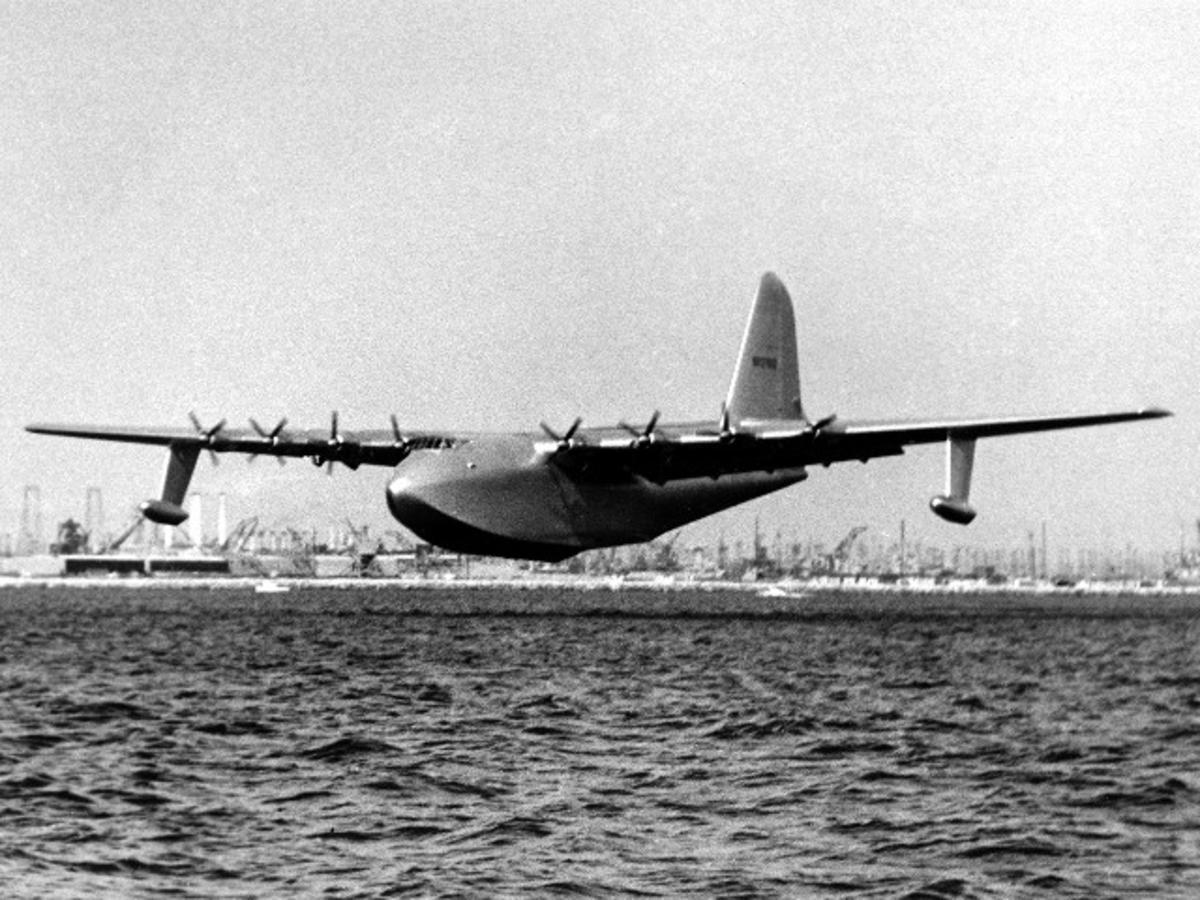 On November 2 in 1947, the “Spruce Goose” took flight, traveling for one mile above California’s Long Beach Harbor. With inventor Howard Hughes at the helm, eight powerful engines lifted the giant aircraft 33 feet in the air, propelling it forward at 80 miles per hour for under a minute. The 200 ton Spruce Goose peaked at 70 feet above the water before concluding its first and only test flight. An amazing feat of modern engineering, the plane was made entirely of wood, built to land on water, and still has the largest wingspan (320 feet) of any aircraft able to successfully fly.

The H-4 Hercules flying boat – nicknamed “Spruce Goose” by the press – was conceived as a solution to the deadly German submarines patrolling the Atlantic Ocean during World War II. These undersea raiders severely slowed U.S. supply and troop transport to Europe, disabling and destroying hundreds of Allied ships. In the first seven months of 1942 alone, the Germans sank 681 Allied ships. To overcome this problem, Henry Kaiser, a steelmaker and builder of the Liberty ships, proposed a huge seaplane: just like that, the Spruce Goose was hatched.

The cargo-type flying boat was designed to carry 750 fully equipped troops or two Sherman tanks over long distances. Kaiser enlisted the help of eccentric billionaire and aviation expert Howard Hughes. The flying boat would be designed and built by Hughes and his staff, hence the original HK-1 (Hughes Kaiser-1) Hercules designation. In 1944, Kaiser and his company withdrew from the project when the Allied effort called for more bombers instead of transport planes. Hughes continued to develop the aircraft, renaming it the H-4 Hercules.

Hughes decided that the plane would be built almost entirely of laminated birch so that it would not use metals necessary for the war effort. As a result, it was dubbed – incorrectly – the “Spruce Goose”, a nickname Hughes hated. It is rumored that he referred to the plane as “Jesus Christ”, in reference to the reaction it elicited from those who saw it for the first time. By 1947, the U.S. government had spent $23 million on the H-4 and Hughes had spent $18 million of his own money – equivalent to more than $464 million in 2018.

After its maiden voyage, the H-4 Hercules never flew again. However, Hughes made sure that the Spruce Goose was constantly maintained and kept in flight-ready condition until his death in 1976. A full-time crew of 300 workers, all sworn to secrecy, maintained the aircraft in flying condition in a huge, $1.75 million, climate-controlled hangar. A million dollars was spent maintaining the plane every year, as the engines were cycled and flight controls exercised weekly. Hughes also continued to design and install modifications. Throughout the 1950s, the crew excitedly awaited future flights, and several more test flights were scheduled, but quickly cancelled. After moving locations in the years following Hughes’ death, the Spruce Goose was finally sold to the Evergreen Aviation Museum (now the Evergreen Aviation & Space Museum) in 1993, where it resides to this day.

Why did Hughes invest so much time and money into this one project? As he explained in 1947 before a U.S. Senate committee investigating whether he’d misused millions of dollars in government funds, “I put the sweat of my life into this thing. I have my reputation all rolled up in it and I have stated several times that if it’s a failure, I’ll probably leave this country and never come back. And I mean it.”