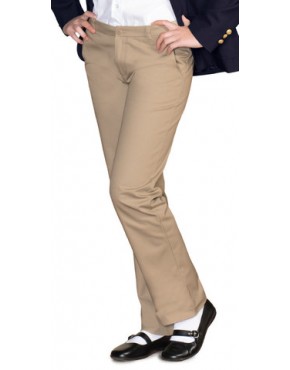 On October 15, the Providence Academy Upper School revealed a new addition to the uniform: a pants option for girls.  This option will be available from November 1 to April 1. Many students consider this a great victory for the girls. They finally get to wear pants if they so choose!  However, not all girls think the pants are a great thing.

The pants do have several benefits, not the least of them keeping the legs warm during the winter.  This is part of the reason

girls now have this option. Additionally, girls report the pants are more comfortable, cheaper, and provide some much needed variety to the uniform.

However great the pants may seem, they do have their downsides.  Most girls believe that the specific pant style required is unfashionable.  Also, because the pants may only be worn during the winter months, girls must also have enough skirts to wear during the remainder of the year.  This means that ultimately the pants are not cheaper than skirts.

This new uniform addition has been in the works for quite a while.  The original idea was proposed nearly two and a half years ago by Gabriella Munger ‘19 and Joseph Luedke ‘19.  Since then, it has made its way through numerous levels of administration, getting approved by Mr. Blonski, Mrs. Harrington, and Dr. Flanders.  Though it took a long time, this new uniform option opens the doors for more changes or additions to the, well, uniformity of the uniform.

The next logical step along this path of uniform variety would be to add a kilt option for boys.  However, the biggest question about this is if any guys would actually wear the kilts.