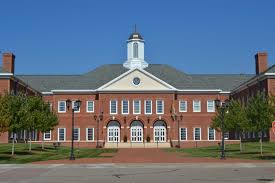 Students at Providence Academy are very familiar with the reaction to the phrase, “I go to Providence Academy in Plymouth”. Usually, the response is somewhere along the lines of “Wow! That’s the one that looks like a college!” or “I used to think that was a government building! The brick one, right?”

The school’s appearance certainly highlights its philosophy, which reads, “From the heart of our motto, “Faith, Knowledge, Virtue,” Providence Academy develops habits of spirit, mind and action to prepare students for future leadership in vocations and civic life.” At Providence, every effort is made to ensure that students are equipped and prepared to enter the world.

Recently, Providence was named “The Most Beautiful Private High School in Minnesota” by Architectural Digest. The publication described the school, saying, “Providence Academy is a stunning Georgian-style colonial structure originally inspired by the College of William and Mary. Recently the school installed a new performing arts center, which features an all-LED theater, the first of its kind in the state.”

Headmaster Dr. Todd Flanders was honored to hear of the award.

“This honor is very moving, given the care with which the design and construction of facilities have been handled these last 18 years,” he stated in the official press release.“There has been a commitment to beauty and symmetry. The thinking is that every child can benefit from surroundings that confirm human dignity, and raise our sights.”

The effort does not go unnoticed. Students certainly appreciate the lovely exterior of the school.

Junior Gianna Bruno stated, “It’s always a little strange when I visit other schools for sports. I’ve been at PA forever. This is what I think of when I think of high school. Same thing with middle school. There’s always a second there when I really appreciate how pretty the outside of my school is.”

Towards the end of the year, however, the interior can have a different effect.

“By May or June, the yellow walls get to you a bit. The outside is really, really nice. But after a hundred or so days of yellow, yellow, yellow, it kind of ruins that one color for you,” Sophomore Julien Hegman laughed.

When mustard yellow became a trendy color among teenagers, Providence students had plenty of jokes to make. “I’ll get the cutesy notebook or whatever, so long as it doesn’t match PA,” joked Sophomore Peyton Pietrini.

Although students often become accustomed to the interior of the school, there is no doubt that the space inside the building is just as amazing as its exterior.

Providence Academy’s website states, “In addition to spacious, comfortably designed classrooms, amenities include state-of-the-art science, technology and computer laboratories. Our athletic accommodations include three gymnasiums, an artificial turf field for football, soccer and lacrosse that is covered by a dome in winter, softball fields, tennis courts, a track, performance stage and a chapel. Providence Academy gives students the finest facilities in which to hone their academic and life skills.”

Manager of Auxiliary and Development Programs Dawn Schommer stated, “I think the unique beauty of the school can be described two ways.  In many respects it is very elegant, grand, and formal.  But at the same time it is also very inviting, comfortable, and peaceful.  That impacts our daily life by reminding us how special PA is, as well as making us feel right at home.”

‘Home’ really does describe Providence for its students. Rather than just being ‘where’ education happens, Providence becomes a ‘how’.

Providence was certainly crafted with the students in mind. This Pre-K-12 school provides all facilities necessary to produce well-rounded students. Aside from its obvious beauty, the school’s design also emphasizes the importance of each individual student. Because of its purpose and style, Providence Academy’s captivating architecture certainly deserves recognition.