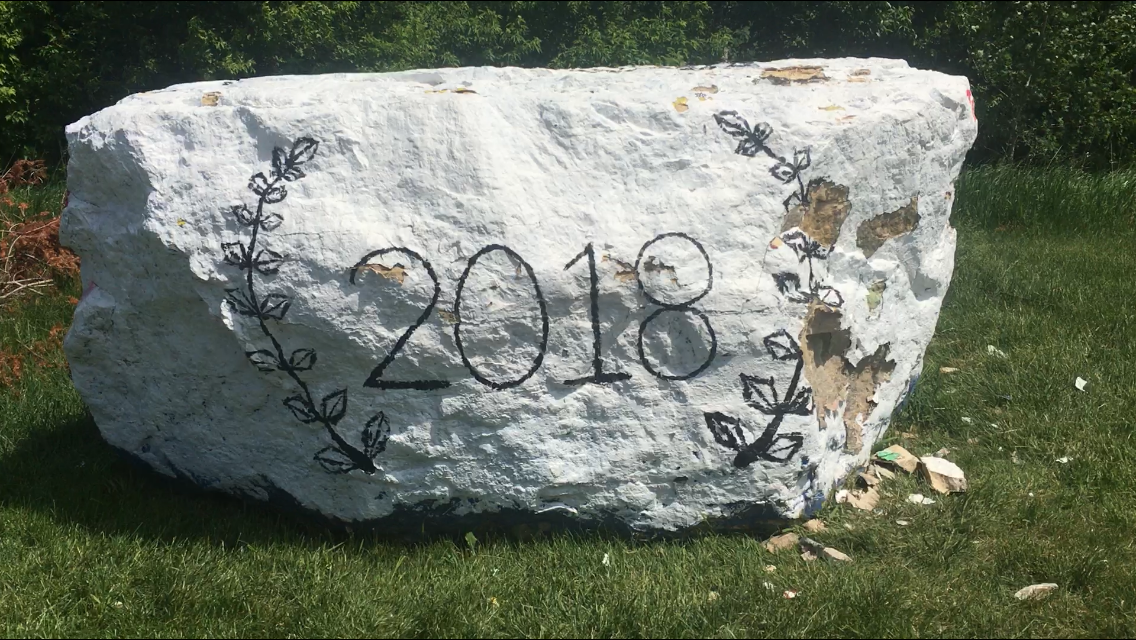 There is a large rock behind the school next to the senior parking lot and the bonfire pit.  This rock is called the Senior rock because each year the senior class gets to paint the rock with a design of their choice and add all of their signatures.

No one knows when and why the seniors started painting the Senior rock.

“This adds to the mysterious side of the rock,” said Headmaster Dr. Flanders.

Before we had the Senior rock that we see today, there was a much smaller rock in that same place.

In the 2011-2012 school year, AnnMarie Healy (’12), a senior at Providence who was also president of the student council, decided along with the vice president Molly Mazza (’12) that in order to boost school spirit, they should do something about that rock.

Coincidentally, she happened to have an uncle, Greg Bruening, who owned a rock quarry in the town of Decorah, Iowa. AnnMarie called her uncle and asked him if he could find a rock that the school could use for this great tradition.

Mr. Bruening started looking, and he found three rocks that were around the right size. He had AnnMarie come out and choose the one that she liked the best. This rock was a limestone sedimentary formation that weighed 24 tons.

In order to transfer a rock that big the three hours from Decorah, Iowa to Providence, they had to use a semi-truck.  Mr. Bruening is very generous, and he rented a crane to move the rock from the truck and place it in the position it sits in today.  As the large crane did its work, the students were trying to look out the back windows of the school.

This Senior rock has been a tradition at Providence Academy ever since. It arrived in the spring of 2012 and has become a symbol of school pride and love that the seniors have for this school.

One Reply to “Senior Rock”