What Do You Meme? Finals: A Survival Guide

The Theatre Banquet as Described through Script

SCENE: THE BLACK BOX THEATRE IN THE BASEMENT OF PROVIDENCE. AFTERNOON

The lights come up on the black box of the Providence Academy theatre department. The mood is bright and cheerful with music playing in the background. A group of Providence theatre students are sitting at tables and standing around in semi formal attire. They are chatting quietly amongst themselves and simply having a good time talking about theatre and admiring the lovely slideshow with all of the pictures from the year’s shows. From the door leading from the couch room to the black box, MRS. SIMMONS emerges. She is the head of the theatre department and also a middle school English teacher. She is dressed festively for the occasion, and she eagerly steps to the front of the stage to address the crowd.

Hello, and welcome to the 2017-18 Provies! The Provies is the time of year when the members of the theatre come together to celebrate another season of productions well done and recognize those in our community who have gone above and beyond as actors and techies. We also take this time to announce the upcoming shows for next year’s season in order to get students interested in joining theatre next year. So without further ado, I present to you the 2017-18 Provies!

We are the theatre council.(Glances around at the others, clearly looking for someone.) Or most of it, that is. Thomas and Ike should be here any minute.

We are in charge of arranging the banquet and making sure that everything runs smoothly. We also help with creating and formulating the awards.

MADDY YOUNG pulls a laptop off a nearby desk and opens it up.

At the end of every show, we create a Google form with all of the awards listed, as well as the nominees for these awards. Award types include best lead actor or actress, best supporting actor or actress, best ensemble member, best techie, most valuable player, most improved, and most memorable moment. (passes laptop to MADDIE AUSTIN)

After the form is compiled, it is then sent to everyone who participated in the show, and they are asked to pick the nominee that they most want to see win the award. The votes are then tallied and the awards are arranged. (closes laptop and sets it on a nearby table)

Today’s the day that everything is revealed, and we get to look back on all of the fond memories that we made through the year. Like, remember that night that the staircase in the Sound of Music set nearly ran over half the cast?

Or the performance where the chorus girls and I came up with all new choreography for our part, and Ike just kind of went with it? That was hilarious!

They all share a laugh as they step off to the side of the stage. The theatre students continue to chat with each other and mingle as upbeat music from The Sound of Music plays in the background. From stage left, MAE(’21) and EMMA(’21) enter along with VAL(’21) and STEPH(’21). They are all dressed for the occasion and they are chatting affably. VAL hears the music and winces a little.

They’re still playing the music from the musical? Couldn’t they have picked anything else?

They just want us to be thinking about all of the good times we had together for that show. Not to mention, it’s the last chance we get before we move on to the next season’s shows.

I wonder what we’re going to do for next year, especially for the musical. They’ll be announcing that today, as well as the fall play and the winter one act.

It would be cool to do something more modern, like Hamilton or Wicked. (holds up a Playbill from each)

VAL takes the Playbills from her and inspects them. She then tosses them over her shoulder and onto a nearby table.

Nah, probably not. I think that Music Man‘s got a good shot. (holds up Playbill for Music Man) No pun intended, of course.

Of course. Though, you know, there’s been a lot of talk about doing either Peter Pan or Into the Woods for the musical. (holds up a Playbill for each) Both of which would be really fun to do.

STEPH takes the Peter Pan Playbill from MAE and pages through it curiously.

Wait, if we did Peter Pan, that would mean that we would get to use the fly system, right?

You never know… you might get your chance to fly across the stage next year, Steph.

Not me. I’m scared of heights. I’m hoping that we do Music Man for musical, and then Charlie and the Chocolate Factory for the fall play.

And what are your guesses based off?

Absolutely nothing except my taste in theatre. Isn’t that lovely?

It’s something, all right.

They walk over to a table and sit down. More students arrive and start sitting down at tables and facing the front of the room, clearly anticipating something. The scene then shifts to the award ceremony, where several students get up and receive small plastic trophies from the theatre council. The trophy recipients sit down at the tables and admire their trophies.

Well, you did a really nice job as Ichabod Crane (inspects her own trophy). I’m just surprised that I actually got MVP for “15 Reasons Not to be in a Play”.

All right! Best lead actor for Sound of Music! I even beat Captain Von Trapp!

Not that I’m too displeased. I got MVP for the show, after all.

I can’t believe that I got the Saint Genesius award.

You deserve it. It has to go to the person that’s been the most dedicated to theatre, and with eleven shows under your belt, I’d say you qualify.

Can I have all of your attention, please? Attention!(the crowd falls silent) Thank you. Now it’s the moment that I’m sure you’ve all been waiting for. It’s time now to announce the 2018-19 theatre season!

The crowd errupts in cheers and then falls silent with a hush of anticipation. MADDY YOUNG pulls out an envelope and breaks the seal.

For our fall play, we will be performing either the all male or all female cast version of Neil Simon’s The Odd Couple.

There is polite applause.

Yeah, it will be interesting to see if they go with an all male or an all female cast.

MADDIE AUSTIN takes another envelope and breaks the seal.

For the middle school winter play, they will be performing Anne of Green Gables

Oh, that’s going to be good. It’s always interesting when they take a book and turn it into a play.

There is polite applause. ISABELLA takes the next envelope.

The middle school one act is going to be The Emperor’s New Clothes.

Oh, that’s going to be interesting.

And now, the moment you’ve all been waiting for.

It’s time to find out what the spring musical for next year.

Place your bets, boys, what’s it gonna be? (pauses for a moment to think. Offhandedly) Probably Shrek the Musical.

He’s crazy if he thinks they’re going to let us do that.

All of the theatre banquet guests drum their hands on the sides of the table and watch while SIDNEY unseals the envelope. She opens the envelope and looks at the slip of paper inside, a look of sheer disbelief crossing her face.

Oh, my. None of you are ever going to believe this one. 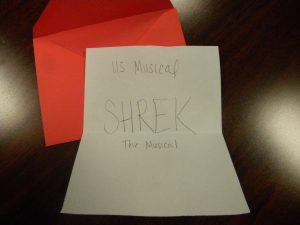