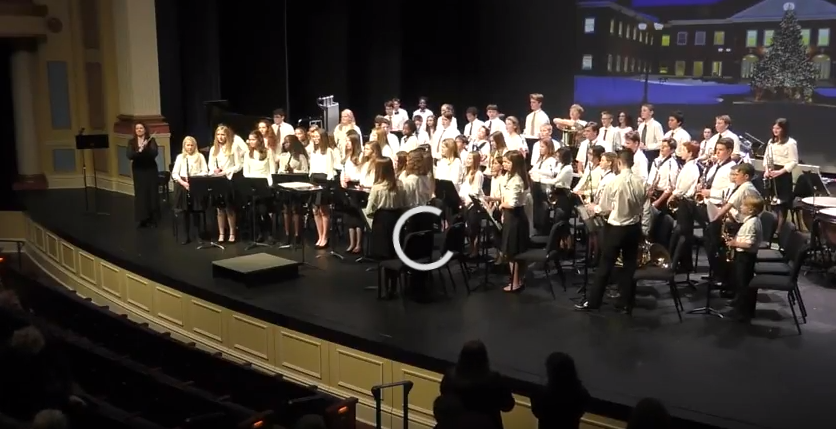 The house level was filled entirely. The balcony was opened for the overflow of people cramming into the velvet-covered seats. What was all the hubbub about? What in the world would all of these people be doing on a perfectly good Tuesday evening? The answer was on the stage.

On November 28th, the performing arts center hosted the first Christmas concert of the school year with the Cadet and Concert Bands. The Cadet Band is made of young and eager fifth graders who meet once a week, while the Concert Band contains sixth through eighth graders, all of whom are directed by Mrs. Nicole Clark. The bands played various Christmas carols, and they focused especially on French music with pieces such as “Chant de Noel”.

Each year the Cadet and Concert Bands study one particular type of music from a specific country. This year’s music is from France. The French Baroque era music introduced more complex harmonic phrasing as well as the clarinet to the orchestral music of the day. The French were also known for their lighter, more simple melodic phrasing which invoked a more light-hearted feel during the Baroque era.

The French songs that were featured by the Cadet and Concert Bands were mainly folk songs. French folk songs are passed through oral tradition, and are a favorite for holidays such as Easter and, of course, Christmas. The Christmas folk songs often depict Chirst’s birth or the nativity scene. One of the better known songs, “The First Noel”, describes the shepherds and the magi as the news of Christ’s birth is shared with them through the message of the angels and through the star of Bethlehem. Another French tune, “Bring a Torch Jeanette, Isabella” depicts two women who hear of Christ’s birth and they go through the city of Bethlehem to proclaim the good news, aided by their torches.

Both the Cadet and the Concert Bands played their pieces beautifully. The simple but true essence of Christmas rang out through the brassy trumpets and the clashing cymbals. The Christmas season was truly welcomed into PA that night with the first Christmas concert of the year, and it set the mood for many more Christmas concerts to come this season.

Here is a link to the concert.