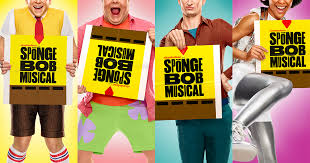 Broadway is known for its interesting interpretations of just about everything. From the Founding Fathers throwing it down in Hamilton to the more operatic Phantom of the Opera, Broadway has done it all. It made America laugh with shows like How to Succeed in Business Without Really Trying and they have moved entire sold out theaters of people to shed buckets worth of tears over shows like Dear Evan Hansen. One thing Broadway is not known for, however, is attempting to turn a thirty minute cartoon show into a two and a half hour musical sensation. And yet, in less than a month, the Palace Theater in NYC will be housing a musical version of SpongeBob Squarepants.

SpongeBob the musical was originally a hit in Chicago, and it is now moving on to bigger and better publicity. The show is billed by playbill.com “Stakes are higher than ever before as SpongeBob and all of Bikini Bottom face the total annihilation of their undersea world. Chaos erupts. Lives hang in the balance. And just when all hope seems lost, a most unexpected hero rises up and takes center stage.” The score includes music from many pop icons such as They Might Be Giants, Steven Tyler from Aerosmith, David Bowie, and a host of others.

The press is not very enthusiastic about the success of this cartoon sensation. Barbara Vitello of the Daily Herald says, “The show is robustly sung by a spirited young cast. They make a splash, but it’s not all smooth sailing. A David Bowie-Brian-Eno tune felt out of place, and a number by Aerosmith’s Steven Tyler and Joe Perry was unintelligible. Moreover, subplots involving scheming restaurateurs and errant pirates threaten to capsize the sponge-saves-the-day narrative centered on efforts of the irrepressibly optimistic SpongeBob (charming newcomer Ethan Slater in a star turn) to prevent Mount Humongous from erupting and leveling his underwater burg.”

Hedy Weiss from the Chicago Sun Times was even less impressed. “Of course it’s hard to argue with any of that, but “The SpongeBob Musical” has a sort of grade-school mentality more suitable to really extravagant children’s theater than anything else. To be sure, no one would confuse it with “Moby Dick,” and it’s a giant savannah away from “The Lion King.” It has its charms, and it remains essentially true to the spirit of the animated TV series that spawned it while finding its wholly theatrical identity. It also is totally predictable.”

The press weren’t the only people grumbling about what a “splash” this musical is making. Even here at PA, SpongeBob is winning little to no favor with upperschoolers. Anton Taylor ‘18 had quite a few words about this new development. Taylor’s first reaction to the idea of this musical was  iconic but oxymoronic. “This is a terrible idea. I like it.” When further questioned, however, Taylor stuck more to the first part of his statement. “We all grew up with SpongeBob,” Taylor explains, gesturing to himself and bystanders Will Miller and Kevan Donohue (both ‘18), “but the idea of it as a musical is disgusting.” Miller, however, was a little more sympathetic. “It could do well,” he mused, “but only if it had the right producer and the right writer.”

When further questioned alone, Taylor explained his reasons behind why he disliked this idea. “Some things are just better left as cartoons,” he explained. “It might do well, but it also has the potential to fall on top of itself.” One thing that seemed to redeem the show in Taylor’s eyes was the inclusion of the second act opener that Squidward sings by the title “I’m not a Loser” by the iconic group They Might be Giants. “That,” Taylor declared, “is beautiful.” When asked if he would consider attending the  show, the answer was firm. “No way!” Taylor exclaimed, “I have better things to do.”

Jack Kruse ’19 was also unimpressed with SpongeBob and his feeble attempt to make it in the big time. “It’s going to ruin SpongeBob,” he explained. “I mean, the actor’s probably going to try and imitate SpongeBob’s voice, which will be super annoying [actor Ethan Slater does in fact try to imitate SpongeBob’s original  voice], and the songs will probably be super sappy too. There are also no human characters in SpongeBob, (well, besides Patchy the Pirate) so it’ll be weird with people dressed up like animals. I also think it’s sad that they added padding to SpongeBob’s pants to make them look square. That’s just sad. I feel like it’s just going to flop like Seussical. I can’t imagine it being very good.”

Another student who wasn’t feeling the love for this new musical was Ikemonso Ayika ’20. “That’s a terrible idea!” Ayika exclaimed. “I have been a SpongeBob fan for years, and I love that show, but if you put it on Broadway, it takes something away from the overall essence of SpongeBob.” Not even the idea of Squidward’s musical number could win any points with Ayika. “The memory should be preserved as a cartoon,” Ayika stated, “and it shouldn’t be put on Broadway. If they need money so badly, I would rather have them rob a bank.”

A lot of the negative rep for SpongeBob came mostly from upperclassmen; however, even the freshmen had little to no sympathy. “SpongeBob on Broadway is like making a pickle and peanut butter sandwich,” one freshman explained, “while both of these things are good, they do not belong together.” Another freshman went on to say that it really was below Broadway’s usual standards. “Broadway is one of the best stages with some of the best actors. SpongeBob simply degrades that.”

Despite the fact that at least one person from every upper school grade didn’t approve of SpongeBob the Musical, a few students actually liked this idea. “A lot of the people who grew up watching SpongeBob are older, so they’ll remember when they were kids when they go to see the show. It’s also a good way for Broadway to make money (which they’re kind of all about) and have more people come because little kids want to see SpongeBob,” Seamus Healy ‘21 explained. Healy was very enthusiastic about the idea of SpongeBob and even went as far as looking up ticket prices. “I mean, it’s SpongeBob,” Healy exclaimed, “Who isn’t going to want to see that?” Clearly, he didn’t talk to Anton about it.

Another spongy supporter was Mae Monette ‘21. “He [SpongeBob] better than Evan Hansen because unlike Evan, who’s frowned upon by the other characters and he just mopes about it, SpongeBob actually goes out and does something.”

Carson Kreger’19 also liked this idea. “This is a great way to introduce younger kids to theatre,” she explained. “The music and the costumes are also really good.  The whole show brings back a sort of nostalgia of growing up with this show on TV. It’s a lot like Seussical, but it’s actually doing better than Seussical did when it was running.”

Maddie Austin ’18 agreed with Carson. “It’s a great way to get kids into theatre,” she explained, “and I think that it will  bring in the next generation of theatre.”

So why is there so much disagreement on this topic? Perhaps it has to do with the essence of Broadway that has been established right from the start. From its very beginning on September 12, 1866 (Val shares a birthday with Broadway), Broadway has been known even from its beginnings as a theatre for the upper society classes and a luxury that only a few could afford. The productions were extravagant and were the ultimate model of high culture of the day. Then you have SpongeBob. This quick-paced, plot-line free, cartoon extravaganza is hardly Broadway material. It may be amusing and entertaining, but when the only cultured character on the show is Squidward (see image above), the show really doesn’t have a lot of hope for the big times. Sorry, SpongeBob, but maybe you’re better left as a figment of simple cartoon bliss.