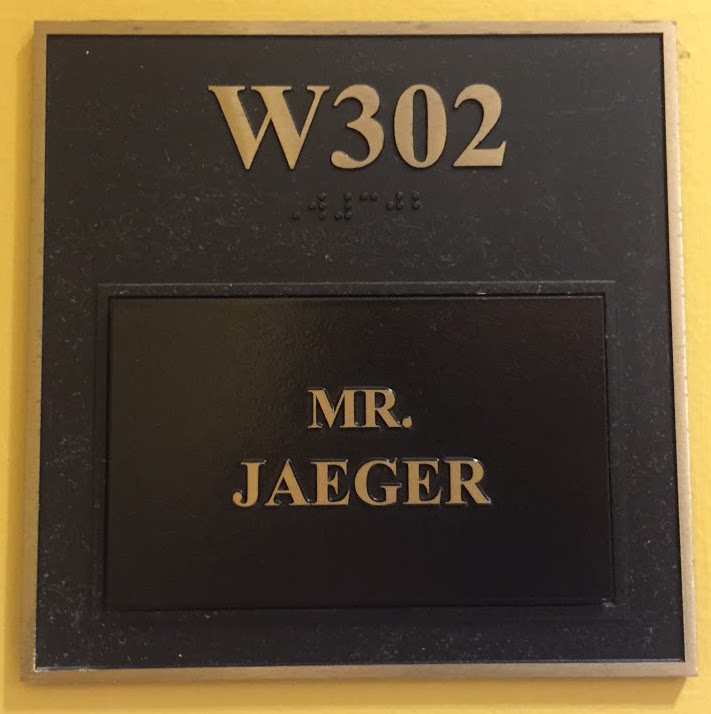 Sixth graders bustle into the classroom, continuing their lunchroom conversations.  The teacher walks over to the door, unfazed by the chaos, and calmly instructs the students to take out their homework from the night before.  His positivity in his interactions with the students makes them focused and ready to learn.  The teacher invites students to read their writing assignments from the night before.  He listens intently to each student, complimenting things that they have done well.

This teacher is Mr. Jaeger, a newcomer to Middle School education and activities coordination this year.  However, you can see that he has a wealth of knowledge and skill.  A founding member of Providence Academy, with another decade of teaching experience at other schools around that state, Mr. Jaeger is a veteran teacher.

However, Mr. Jaeger isn’t just an educator. Senior Development Officer, Dean of Activities, 2nd grade teacher, religion teacher, 6th grade history teacher, and Director of Athletics are just a few of the roles that Mr. Jaeger has held at Providence Academy.  With a resume like this, it is clear that Mr. Jaeger has many unique talents to offer the PA community.

Mr. Jaeger has always had a passion for teaching.  After taking an “Elementary Trainee” elective course in his senior year of high school, Mr. Jaeger discovered his love for the classroom, going on to study Elementary Education at Moorhead State University.  Mr. Jaeger went back to school years later, earning his teaching certificate for middle school science, math, foreign language, literature, coaching, and Kindergarten.

Mr. Jaeger is back in the classroom for the first time since the 2011-12 school year.  He previously taught 2nd grade and religion, so 6th grade history is new to him too.  Even faced with all of these new situations, Mr. Jaeger is excited to start.  “It’s an adjustment; it’s been fun though,” he says.

Although Mr. Jaeger is experienced, teaching in 2017 presents its challenges.  New teaching aids like CAP, Moodle, announcements, and more are all things that are foreign to him.  “There’s a lot to know,” Mr. Jaeger says.  However, as a 6th grade teacher, Mr. Jaeger has the unique experience of learning alongside his students, who are new to middle school too.  “I’m in the same boat (as the students),” says Mr. Jaeger.

In addition to being a teacher, an example of Mr. Jaeger’s versatility is his new role as Dean of Activities, a position he has only held since mid-August.  Mr. Jaeger has gotten right to work, however, diving into lower and upper school activity sign ups.  With help from his colleagues, especially Mrs. Gregg, Mr. Jaeger is already using his experience to improve clubs and activities at Providence.

As many students have noticed, Mr. Jaeger has made some changes to upper school clubs.  Now, students are required to pay a small fee to join a club, causing them to be more reflective when they sign up for different activities.  This means better participation and an overall better experience for everyone involved in PA clubs.  Policy changes like this one show Mr. Jaeger’s skill in revamping PA activities, even though it is a new position for him.

Prior to Mr. Jaeger’s new positions, he was the Athletic Director at PA.  Although he isn’t an AD anymore, Mr. Jaeger is still influenced by his love of sports and coaching.  One thing that Mr. Jaeger tries to emphasize is a “team mentality” in his classroom and in his dealings with activities at PA.  Although many see learning as an individual activity, Mr. Jaeger firmly believes that if one person is struggling, it is the duty of the group as a whole to ensure that the person is getting the help and support that he or she needs, whether it is in the classroom or in a club.

Mr. Jaeger has always been drawn to teaching and athletics.  However, he sees some advantages to his new positions that were missing during his time as an AD.  Although Mr. Jaeger was heavily involved in student athletics in previous years, he was never able to develop personal relationships with any students.  As an AD, Mr. Jaeger had “limited student contact” because he never got to see students on a regular basis.  However, as a teacher and Dean of Activities, Mr. Jaeger is excited to start interacting with students again.

One teacher, many talents: 6th grade history teacher, Dean of Activities, former Athletic Director, and more.  Mr. Jaeger may be starting two new positions this year, but his experience and passion for teaching has given him the skills to tackle the positions head on, helping the PA community grow.