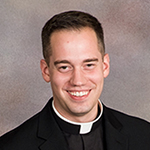 When Michael McClellan was in grade school in Faribault, Minnesota, people would ask him if he wanted to be a priest. According to Dave Hrbacek’s June 3, 2016 article in The Catholic Spirit, young Michael responded, “No, there’s no way.” One day, after Mass, the priest asked Michael the same question. Once again, his answer was, “no way.” The priest suggested that he should think about what God wants him to do with his life.

Little did he know that after high school, he would feel called to study at the minor seminary St. John Vianney on the University of St. Thomas campus. It was there that he majored in philosophy and Catholic studies. He was ordained on May 28, 2016. He is now the chaplain at Providence Academy.

Fr. McClellan is looking forward to serving the community through the sacraments. This includes Mass before school on Fridays open to the entire PA community, as well as school day masses Tuesday through Thursday for the students. Fr. McClellan also hears confessions Tuesdays, Wednesdays, and Thursdays from 1:30 to 2:00.

Though he’s technically new to PA, Fr. McClellan has been here since the beginning. Coincidentally, he was at the first football game that PA ever won. Unfortunately, he was cheering for the opposing team, his high school, Bethlehem Academy. Fr. McClellan recalled this, saying, “I’m much happier to have been beat by Providence now that I’m part of Providence.  Also, very happy to have seen two Providence football victories in the past two weeks!”

As well as being the chaplin at Providence, Fr. McClellan is an Associate Pastor at St. Therese where he celebrates Mass, says funerals, prepares couples for marriage, and visits the sick. He is also in charge of the RCIA program at St. Therese.

He is looking forward to visiting classes and getting to know students and teachers. Fr. McClellan is very eager to be a part of the Providence Academy community.