Lent What should I do over spring break?

By Leah Barron On March 16, 2017 In Current Highlights, Features 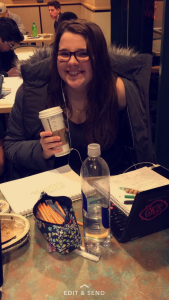 Claire Klassen ’17 holds her Starbucks while she studies for tests.

“Can I have a small green tea lemonade with shot of raspberry?” Amelia Ryan ’17 asks the barista at Caribou. “Oh that sounds so good, I’ll have the same but make it a large…Colin you are paying right?” Rajan Moothedan ’17 says. This is a typical conversation that happens on “Caribou Wednesdays” as the group of senior friends, Ellie Schneider, Claire Klassen, Amelia Ryan, Rajan Moothedan, Jack Wall, Colin Neeson, and Jacob Zielinski, dubbed their favorite day of the week because this is the day they all go get coffee together after school. 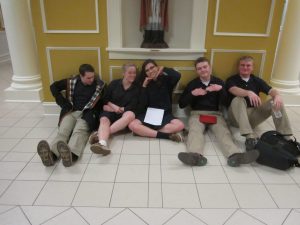 Almost if by instinct they all attempt to get Colin Neeson ’17 to pay for them as well. This may seem strange to try to get someone to pay for you when you have money, but when you end up going to Caribou 4-5 times a week, getting someone to pay tends to be a nice bonus. Some students spend only a small amount of money per week, for example Gabriella Munger ’19 who tends to spend $10/week but others who tend to go quite often like 3-4 times a week, like senior Jack Wall, tend to spend $25-$30 a week . Colin Neeson ’17 told a story of how he spent almost $500 in a month on coffee resulting in his parents taking away his credit card. Others, however, simply hide the amount they spend to avoid getting in trouble “My parents don’t know how much I spend, I use cash or my Starbucks app,” Maureen Burns ’18 comments.

With Lent here some have decided to give up the frequent visits to Caribou or Starbucks. “I gave up Caribou Coffee for Lent so I go to Dunn Bros Coffee instead,” says Jack Wall ’17.  In respect for his Lenten promise, the “Caribou Wednesday” group has started going to Dunn Brothers instead. “I like Caribou or Starbucks more because they taste better and are cheaper but I am okay going to Dunn Brothers instead,” senior Rajan Moothedan says about the change in coffee venues.

This group of friends are not alone in their coffee addiction. “It’s kinda overpriced but I can’t stop drinking it,” says junior Maureen Burns.
The “Caribou Wednesday” group realizes their addiction but have no desire to change their ways. They love their coffee and time spent with friends and they are okay with the sacrifice of the money. As Senior Ellie Schneider says, “Coffee is an addiction, but I’m not ready to get help yet.” 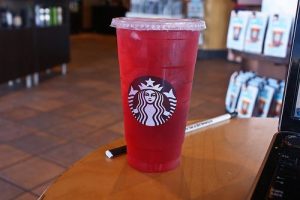 The very popular drink “Green Tea Lemonade with a shot of raspberry.”

One Response to The Happy Addiction