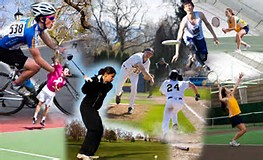 As the winter starts to wrap up, the last sports season of the school year is just beginning to pick up at Providence Academy.  This season is the spring sports season.  All of the sports seasons at PA are very fun and exciting but there is something special about spring sports that attract more people to it.  There are two main reason why spring sports are more intriguing than some of the other seasons: the weather and the length.  The weather for spring sports is obviously much better than for the winter sports. Getting outside to compete is an attractive factor for spring sports. The spring sports season is also much shorter than the fall and winter sports seasons, which lowers the potential for athletes to burn-out.
The Spring sports season is also a large draw for the PA sports fans. PA offers five winter sports.  Of these sports,  the two that typically attract the most interest are hockey and basketball.  These are two really exciting sports to watch, but they still are inside because of the weather.   The other sports during the winter that are outside usually don’t draw a huge amount of PA fans to the games, so essentially the last time PA sports fans were able to go outside and watch a game was during football season.  That is a long time to wait to watch a game outside!
When early spring comes along the temperatures start climbing and the snow melts, so sports like baseball, lacrosse, and tennis can start.  It was a long wait but is definitely worth it to be able to watch these exciting sports outside.
The spring sport seasons at PA are very short.  Most of the spring sports start around early April and end in late May.  Even though captain practices extend the length of the spring sports season for some of the sports, the final season of the year is still quite a lot faster than the winter and fall seasons.  Most of the winter sports start in early November and last into late February.  Even fall sports go on quite a bit longer.  Football for example often starts in the summer and goes throughout the entire fall, spanning August-October.  So, spring sports often offers the perfect season for people who want a shorter term sport season.  Having a shorter season also can bring out more fans because there is less time to attend a game.
The spring sports season at Providence is a very special and exciting time for both the fans and the players.

4 Replies to “Why are Spring Sports so Special?”