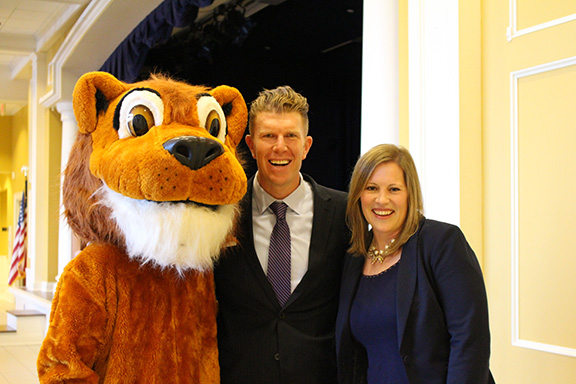 This past Thursday, a speaker named Matt Birk came to Providence to give a talk. Matt Birk is a former Vikings player, who now speaks out on pro-life and pro-traditional marriage matters. Birk’s talk was on his life of football, as well as how his faith tied into it.
Alumna Brenna Murphy ’09, introduced Birk’s talk. She says, “Matt Birk is a good friend to Abria and spoke at their event.” Abria is a pro-life company that offers a safe and supportive environment to pregnant woman.
When he was in the NFL, Birk had to balance the business of football and his faith. “It wasn’t hard, especially since three out of the four coaches I had were Catholic and so we went to Mass on Sunday before games” says Birk.
During and after his football career, Birk received many honors and awards. He says the one he is the most proud of is the 2011 NFL Man of the Year award because it recognizes excellence on and off the field.

Although Birk is no longer in the NFL, he is still involved. He says he is helping the NFL develop football at the high school level. Currently, Birk is also involved in many pro-life charities in the cities and says, “That’s my wife and I’s focus.” Because he is involved in many pro-life charities and is a pro-traditional marriage advocate, one might think that would hurt Birk’s career. However, he says, “It actually helped my career, because now I get to go around and speak about life.”
Both students and teachers liked it. “I liked it. It was different than other talks. He didn’t try to force it on us. He was more real than the others,” says Leah Barron ’17. Spanish teacher Ms. O’Brien says, “Yes, I liked it. I think parts of it could be controversial, but I agreed with his message. I think I can understand where he is coming from on being on your own and figuring out your faith on your own. I think we will all face that at some point in life.”
Matt Birk’s talk reminded PA students and faculty to remember what is important and stand up for it no matter what anybody else says.