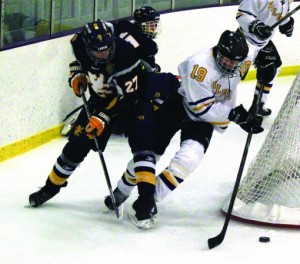 As fall sports start to wrap up, we begin to turn our heads to one of the most exciting seasons for sports: winter sports.  Providence Academy offers five sports for boys and four for girls.  Of those, four are co-ops with different schools and five are just Providence. The teams are boys swimming(co-op), girls hockey(co-op), boys hockey, boys basketball, girls basketball, boys Nordic skiing, girls Nordic skiing and boys and girls alpine skiing (both co-ops).
One of the biggest, and most influential sports at Providence is the hockey team.  The team had a tough season last year with a 4 and 19 record and had some tough losses. But this year the team is feeling very good about their chances, and they are very excited about their almost entirely new coaching staff.  The team is also looking forward to a more experienced team this season after having so many freshman last year.  Sophomore goalie, Sam Ferreira said, “we have a more experienced team and we have a new coach and a lot of leaders to look forward to.”
Another big winter sport at Providence is boys basketball. Boys basketball had a strong season last year, and the team is looking to build off of last year’s teamwork and strong work ethic.  Point guard Dylan Servais said, ” We are looking pretty good this year hoping to get some wins and make a playoff run.”
Girls basketball is also coming off of a good year with a 14-10 record even though they play in a hard conference, including Minnehaha which had a 22-3 record.  The girls team only lost one senior this year, so things look pretty good for them going forward. Sophomore Maggie Murphy said,  “We only lost Clara, but she was a big part of the team, and this year I think the seniors will step it up because we have three great captains.”
Even though basketball and hockey are the two most talked about sports, Providence does have other winter teams.  The Providence Academy men’s swimming team co-ops with Osseo.  The two men’s swimmers from Providence are Adam Huser and William Honnold.  Their first competitions begin in December.
The Nordic Ski Team also plays in the winter with five students from Providence Academy.  They play with Heritage.  Though boys and girls practice together, they compete separately.
The feeling in the air around all of these sports teams at Providence is so positive, it would not be hard to imagine this being one of the most successful winters yet for Providence Academy sports.

3 Replies to “Intro to Winter Sports”