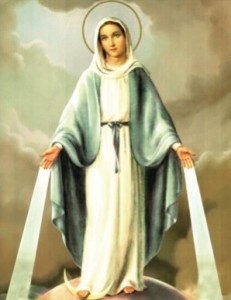 In the Catholic Church, the month of May is a very important time of the year.

This is because the month is dedicated to the Virgin Mary, who is one of the most important figures in Church history, as she is the Mother of God.

Father Vaughn Treco, chaplain for Providence Academy, says that Mary has a, “unique place in the story of the salvation of the world that God gave to Her”, and she is “pivotal” to the redemption of man.

This tradition started at the end of the 13th century in order to counterbalance an up-and-coming secular holiday. Part of this includes the May Crowning, in which people crown Mary with a crown of flowers. This is because Mary, in all her importance, was assumed into Heaven and crowned Queen of all Heaven and Earth. They crown Her so that, in a way, they can do what has been done in Heaven.

Although She was only human, she was protected from Original Sin so that she could be the Mother of Jesus Christ, who is God. She is also the only other perfect human aside from Jesus Christ, and now is Queen of all Heaven and Earth. Without her, Christianity would have nothing to base its beliefs on because there would be no Savior in the first place.
So in the end, the Church gives an entire month to Mary, because of how important she is for the Faith.

Without her, salvation would not be possible and no one would be saved.