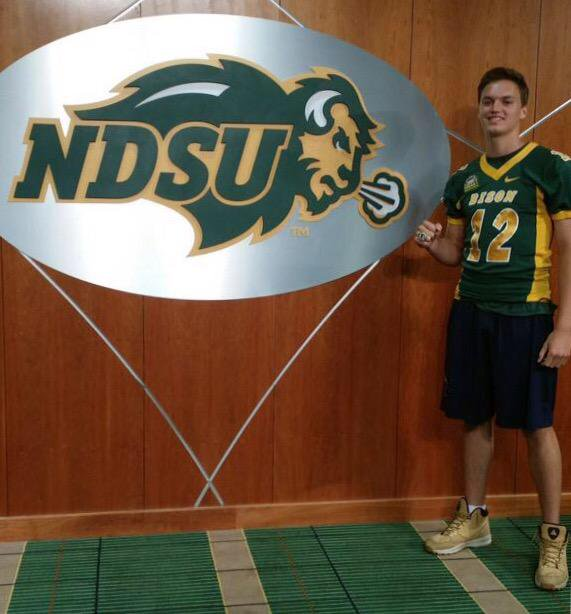 In the summer of 2015, Van Dellen received a full-ride scholarship from North Dakota State University to play football.

Van Dellen started to play football when he was in third grade. Even at a young age he knew that playing football was something that he wanted to continue to do for the rest of his life. Watching his idol, Brett Favre, play in the NFL prompted him to want to do the same.

“I watched a lot of NFL games and especially Brett Favre,” explained Van Dellen. “I wanted to play in the NFL, and I still do, but then I realized that I would need to go to college in order to get there [the NFL].”

Even though Van Dellen knew at a young age that he needed to become a college athlete before becoming a pro, he didn’t begin to think seriously about it until his freshman year. Since then, he continually works at becoming a better athlete.

The actual recruiting process didn’t begin for Van Dellen until the summer going into his junior year. During the summer, he attended multiple college camps. Along with attending these camps, Van Dellen emailed out his highlight tape and stats to multiple colleges. It was through these communications, that he came into contact with NDSU.

“They [the NDSU coaches] contacted me and told me that they were interested in me,” said Van Dellen. “The quarterbacks coach came to school one day, watched me throw and then invited me to their three-day camp during the summer.”

It was at this camp that Van Dellen earned his offer from NDSU. The camp invited many hopeful high school athletes, making the camp very competitive. Van Dellen thrived in this pressure and said that it was the best he ever practiced.

Van Dellen attributes his success to the hard work that he put in during the season and the offseason and to the people who helped him, namely the coaches at the QB Institute. Van Dellen started working at the QB Institute, a company focused on helping quarterbacks with their skills and knowledge of the game, the summer going into his junior year.

“They [the coaches at the QB institute] turned playing QB into something that I can be passionate about and work at every day,” said Van Dellen.

Along with the help and coaching, Van Dellen’s work ethic helped him procure an offer to play for NDSU, which will help bring him closer to his goal of playing in the NFL. Receiving an offer from NDSU was a big relief for Van Dellen and helped him feel grateful for all the work he put in.

“It was nice to know that all the time and effort I put in paid off,” explained Van Dellen.

If he could have done it all over again, Van Dellen said that he would’ve started training earlier.

“I wish I would’ve started weight lifting earlier,” said Van Dellen. “If I had, I probably would be a much better player.”

Van Dellen advises young players, who are hoping to play sports at the college level, to do just that. He also says that kids that want to become college athletes should know that it takes a lot of sacrifice and so they should look for help reaching their goals.