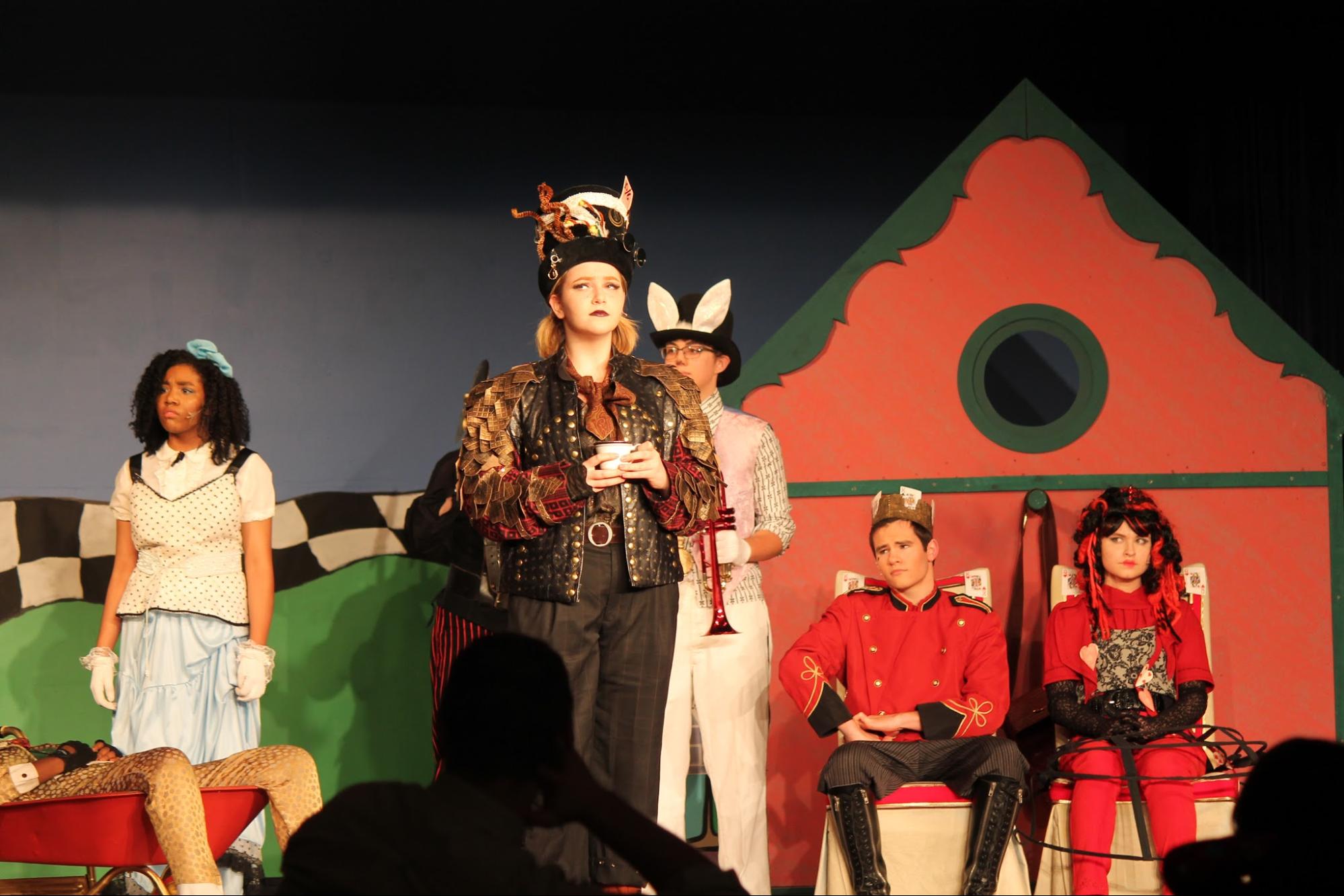 When wishing fellow classmates good luck for the fall play of Alice in Wonderland, one would hope the stars did not conclude as the only ones wished to “break a leg.”

Although the cast of this play did a fantastic job in performing exceptionally well, more deserve applause. The crew of Alice in Wonderland spent hours upon hours making the actors look their part, finding just the right props and set pieces to make the scenes feel realistic and running the backstage area smoothly and efficiently.

Abby Fafinski ‘17, creating costumes since middle school and leading as one of the most ideal costume designers at PA, had the experience to sketch costumes to fit the original characters in Wonderland along with fitting the “steampunk theme.”

“I love seeing how literally my sketches are brought to life,” Fafinski said.

She explains how she enjoyed her job yet it became a little stressful due to the deadlines, which were quite tedious.

Camille James ‘17 created the makeup and hair looks for each character. Testing the ideas, applying these looks to each and every dress rehearsal and show, and on top of that helping out with any other little task that needed accomplishment made up Camille’s task for two months to make the show a success. She also dabbled in construction crew.

“Makeup and hair was easy and fun in the beginning, I got to take time to look at different styles of makeup and hair and create ideas that I couldn’t wait to try out,” James commented.

She added that a little difficulty occurred later when assigning who created what look.

The White Horse, constructed by James and Amelia Ryan ‘17. Photo by Evie Kenney ‘17.

Hand crafting Tweedle Dee and Tweedle Dum’s hats, making the Knave’s fake earring, and painting a pepper mill consisted of some of the many tasks of the prop master, accomplished by none other than Ana Palomerez ‘17.

Throughout her theatrical experience at PA, Palomerez’s hard work proves as an asset to each and every show she partakes in. Having worked in almost every form of tech crew since freshman year, she occasionally operates in both the cast and crew of performances. However, she explains how as the date of the show grows closer, the stress grows as well.

She adds that “Some people would certainly call me crazy but I love my job. There is a certain pride you get in seeing all of your props on stage and knowing how much work you put into each of them. I wouldn’t have it any other way!”

Lastly, Sydney Kirchoff ‘18 and Essie Broich ‘18 led the very important job of running the stage manager role. This included going to each rehearsal and finding ways to improve the show. This also included partaking in the actual performances, helping with scene changes, making sure the actors had everything they needed and even occasionally giving orders to other crew members.

“Being a stage manager is not extremely stressful as long as you manage what you are doing in an efficient way,” Kirchoff said.

Kirchoff recommends the involvement of crew to anyone.

The crew at PA works extremely hard for the actors and the show. Their passion and love for their jobs and purely helping others shines throughout their work. Make sure to never forget about the amazing crew!