The Celebration of Thanksgiving: a holiday for a nation that is usually lacking a vacation On Halloween

The great debate of the PA lunch Length 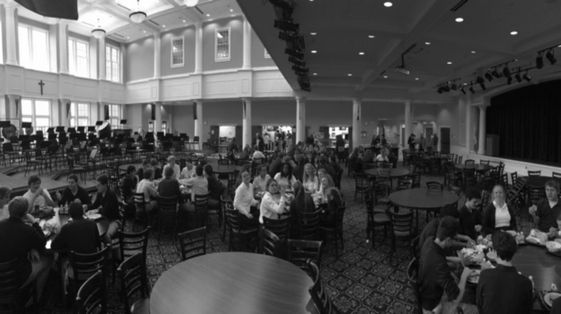 Students eating lunch in the great room at PA.

The length of the Providence Academy lunch period has been widely debated and discussed by both teachers and students.

Currently, PA has a 25 minute lunch period. This does not mean, however, that the students get to sit down and eat for 25 minutes; the students have to walk down to lunch, stand in line, which sometimes tends to be massive, especially when Crispy Orange Chicken is being served, pay for their lunch and finally sit down. By the end of this process, students often only have 15 minutes to eat their meal while trying to carry out various conversations with their friends.

By taking off 3-5 minutes from each of the seven classes, the lunch time increases from anywhere from 46 minutes to an hour and 20 minutes. This would give the students time to relax and the ability to eat at a more leisurely pace and not suffer from choking due to the combination of cramming food into their mouths and talking.

Other schools similar to PA in rankings and academics have longer lunch periods, and they are still able to maintain their status of academic success. For example, the Blake School gets anywhere from 35-45 minutes for lunch, depending on the day, and they also get a free block period, giving them abundant free time per day, and yet they still maintain their high level of academic success.

A lot of students believe that this alteration will not have much of an impact on classes and on school in general.

Maddie Austin ‘18 said this 3-5 minutes, “wouldn’t make a huge difference in the amount of things we learn.”

Further on this, Isaac Von Dohlen 18’ said that, “it seems like there is a lot of unused time in class due to ending the lesson early [and] disruptions in the classroom.”

According to Von Dohlen, this would have a positive effect on the student body and on individual students because it, “would positively affect the student body by allowing more time to both eat and socialize, removing both from the classroom and making it more of a learning environment in the classroom.”

Though many students want a longer lunch, a few students and teachers dislike this idea for various reasons.

According to Mr. Jonathon Janz, this would negatively affect both the student and teacher bodies because, “shaving off time from each class does add up over the course of a semester, resulting in less teacher student interaction for a given course.”

Mr. Janz also questioned why the school would change something that worked well in the process of rendering one impressive graduate class year after year. Like Mr. Janz, a few teachers and students believe that subtracting time from any given class would affect the class as a whole, and cause teachers to cram more information into every given class.

Further on what this new period would look like, students said that they thought that it could resemble that of a lunch combined with a study hall in a relaxed environment. Brock Lahr ‘18 thinks that this new lunch period could also give students the option of getting some fresh air for 5-10 minutes, rejuvenating the body after sitting in school for six hours.

“This new lunch period would look like a normal lunch but with the option to sit at designated tables for school things after you finish,” said VonDohlen.

Students in extracurriculars thought that they could really benefit from this because most can sometimes struggle to get homework done while maintaining at least six hours of sleep due to the time consumption of the extracurricular.

“It is hard to balance homework, soccer or track, depending what time of the year it is and still get at least six hours of sleep,” Austin said.

Both positive and negative feedback has been given in response to the idea of cutting off 3-5 minutes from each class to provide students with a longer lunch period, but overall the majority of PA students look upon this prospect with approval, hoping that in the near future, this may occur.