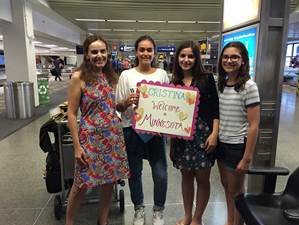 For three years, PA has had the privilege of receiving between four and five exchange students. This school year, the four exchange students Ana Carillo, Laura Jiménez, Cristina Arcones and Diego Jaureguizar joined the sophomore class.

Most foreign exchange students apply through a school program or an organization which offers studying abroad opportunities. Ana, Laura, Cristina and Diego applied through their school program, which gave them options to study in different American schools.

“The school gave us the opportunity to be an exchange student, said Laura Jiménez. “The only thing that we needed to have were good grades and behavior.”

Studying abroad not only builds new friendships but also opens students to experiencing different cultures and aids in understanding themselves better. Taylor Caruso ‘17 first met Ana during the Spain trip that happened last summer in June.

“I got to know her pretty well before she actually arrived in Minnesota,” Caruso said. “I was not that worried [about being her host] because Ana and I kept in contact all summer.”

Life in Spain is different from the cold, busy and construction-full Minnesotan life. Madrid experiences dry weather all year round, and temperatures in the winter only drop as low as 46 degrees unlike the negative degree weather endured every winter.

Diego explains, “the only thing I miss is probably the weather we have in Spain, because it is less cold and more of a summer weather”

Other than the weather, Spanish culture is very different to Minnesotan culture.

“There are a lot of differences from the schools in Spain and in Minnesota,” Christina said. “The biggest one is that teachers go to the student’s class, the students don’t switch classes. Another thing is that Spanish schools usually finish at four or five, and we have an hour and a half for lunch and recess.”

Here in Minnesota, depending on the school, public or private, school ends roughly between two and four o’clock. Most schools in Minnesota have students change classes to have a different setting or atmosphere.

Sports are another major difference between Spanish and Minnesotan culture. Here in the states, football is played by using hands to control the ball whereas in Europe the term football refers to what is mostly known as soccer and American football as rugby. The foreign exchange students have to adapt to this new culture of referring to soccer instead of European football.

Diego, Cristina, Ana and Laura have also experienced a few Minnesota specialities such as visiting the State fair and Mall of America.

“I went to the State Fair and Mall of America, which were so much fun,” Ana said. “And school football games, which we do not have in Spain, are lots of fun too.”

Ana, Cristina and Laura have all had one of their siblings go through the same exchange program. Cristina’s older sister, Lucia Arcones, came to Providence with last year’s foreign exchange group. Whereas, Ana’s older brother and Laura’s sister came two years ago.

“My parents asked me if I wanted to go and since my sister Lucia and the other exchange students had a great time, I accepted” said Cristina.

Señora Joelynn Lahr states, “By the time [the program] is in print, students will learn more.”

Being a foreign exchange student is not easy, because a person may have to adapt to the lifestyle of a community. Alternatively, exchange programs open opportunities to experience new things which not only establish friendships but also inspires growth.