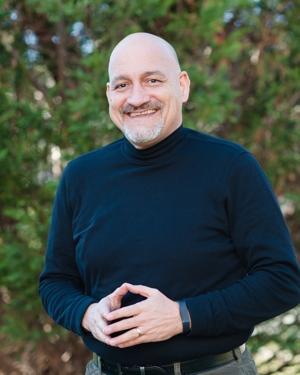 One of Providence Academy’s most important missions, being a Catholic school, is guiding the students in their faith life.

This is clearly a vital aspect, because it is hard to concentrate on an education when someone’s spiritual life is unstable. That means keeping the faith life of every student healthy is something that needs to be taken care of immediately.

In order to do this, probably the most helpful person to have is a chaplain. A chaplain is sent to institutions such as schools, military posts, and hospitals. PA needs a chaplain to celebrate the Mass and to teach religion classes, the reason why Fr. Vaughn Treco is here.

Fr. Treco is just starting out his career as a chaplain at PA. In fact, this will be his first time being a chaplain at any institution. So far, he really enjoys interacting with the students and faculty along with celebrating Mass every day.

“It’s been incredible” he said.

It has been a while since he had duties such as this, and he that its been 16 years since he had a “flock to care for” and is thankful for getting to do this again. Clearly, Fr. Treco really enjoys taking care of groups of people.

Amazingly enough, he converted from the Anglican Church, and the fact that he became a chaplain shows how much dedication he has for God. Growing up, his parents taught him to love and trust the scriptures, which he has done all his life.

He became an Anglican because the college he went to is Anglican. After a while, though, he started to notice that the Anglican Church did not fully embrace all of the scriptures, and he furthermore realized that the only Church that did this is the Catholic Church. So, he converted to Catholicism and was ordained a priest.

Fr. Treco has many goals and hopes for the future as the chaplain. He really wants to expose the students to the wealth of the Liturgy. He also wants to introduce them to the different Eucharistic prayers in the missal, which, according to the United States Conference of Catholic Bishops, is the book containing the prayers in the Church.

Fr. Treco really wants to get to know the students as much as possible and find a way to see and care for the K-1st graders, who do not have Mass. He also wants to make us aware that when someone goes to a school such as PA, they can really take the faith life for granted.

He wants to call all those who do to be thankful to God for such a wonderful learning environment. Overall, he looks forward to opening up the hearts and minds of the students and teach them to love God more fully. Fr. Treco will undoubtedly help in many ways when it comes to faith, school, and life in general, and that is something to be thankful for.