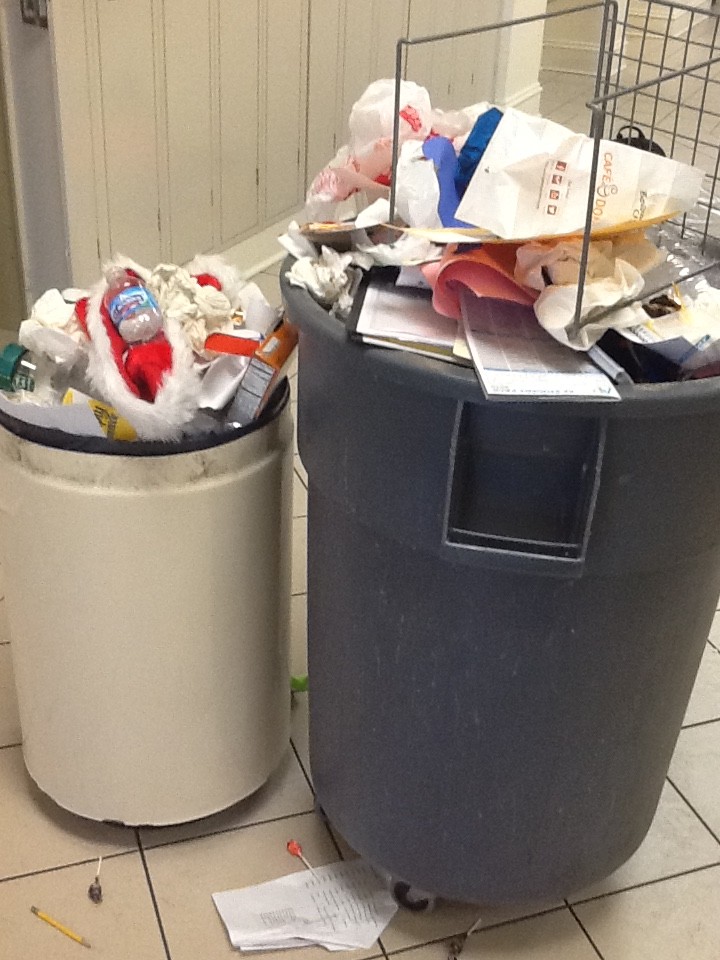 With the end of the year coming up, it is time for Providence Academy students to begin emptying out their lockers. Each year, the school garbage cans fill up with horrific items that have been rotting away in the dark corners of our lockers since Christmas break. The halls of the school reek with the mixture of many unknown substances. Teachers, although dramatically depressed at seeing their favorite people depart, breathe a sigh of relief as the lockers are finally cleaned out for the summer.  For most kids, their lockers are simply a dumping ground for every handout they have ever got. College magazines, school permission slips, old quizzes, homework assignments, looseleaf, and hall passes clutter the small five foot by one foot lockers.  However, some students use their personal storage for rather grotesque things. Mrs. Annette Hildebrandt remembers “a locker that had a tuna fish sandwich and a carton of milk sitting in it for months.” The smell could be recognized before one ever reached the locker. Alex Witkowski ’16, has a locker horror story that’s one to compete with. His freshman year his locker was “always a mess. It was cluttered with scattered papers crunched up books and old food that I never got around to eat. But it was a Monday when I walked into school and my locker was more than just its average dirty state.” The new state smelled, and very strongly at that. Young Mr. Witkowski opened his locker to find that his old soup thermos had exploded over the weekend and molded all over his school books and binders. It took the freshman three class periods to clean, sanitize, and somewhat eliminate the odor.

Although the upper school students may misunderstand the actual purpose of a locker, middle school students utilize their upgraded cubbies much more professionally. Mrs. Elise Sheehan marvels at the young girls’ lockers that are equipped with “little LED powered chandeliers as well as mirrors, posters, magnetic organizers and color coded binders!” The younger students certainly have taken advantage of personalizing and modernizing their lockers. However, no matter how much we fill them up, all the lockers in Providence Academy will be left vacant in the matter of a few weeks. Although most of the contents end up in the trash, many of it can be salvaged. Mr. Joshua Blonski, a science teacher at PA, has a sort of recycling method for students to participate in. “I have a huge glass jar in my classroom (W214) in which I collect all unwanted but working writing utensils. I always fill it to the brim at the end of the year from clean-ups and let the students use them in class for the following year.” What a great way to help out fellow classmates! When all is said and done, lockers are wonderful contraptions that aid everyone in their personal ways. Their appearance however, is much more pleasant from the exterior.