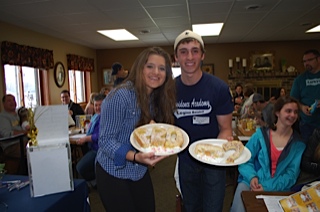 Every year, in early spring, a major fundraiser is held at Dobo’s Cafe & Bakeshop in the city of Loretto. The fundraiser is organized by the Providence Academy Baseball Boosters. It helps fund the PA baseball team events and equipment needs for upcoming years. The fundraiser took place Sunday morning from 8:30 a.m. to noon on April 15th. A full breakfast buffet was served, which included scrambled eggs, french toast, sausages, fruit, and Dobo’s famous caramel sticky buns. This year’s breakfast was the fifth annual fundraiser held at Dobo’s Cafe. 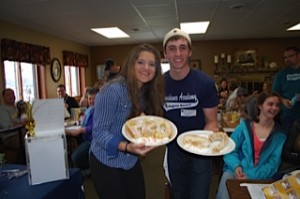 The idea to have the fundraiser at Dobo’s Cafe originally came from Mr. Doug Doboszenski, Varsity Assistant of the PA Baseball Team. He reached out to his family, and asked them if the fundraiser could be held at Dobo’s Cafe, and they thought it was a good idea. The fundraiser is organized by PA baseball captains, and their parents. Players from the PA baseball team actually work the event as hosts, servers, and kitchen help. Roughly 325 people attended Sunday’s event including players, coaches, family members, students, alumni, and other supporters of PA baseball. The fundraiser is completely donation based and generally raises between three and four thousand dollars. A portion of the proceeds goes to benefit Gianna Homes-Gladys’ Place in Plymouth. Gladys’ Place is a residence in Plymouth that provides a home for six people suffering from memory loss. 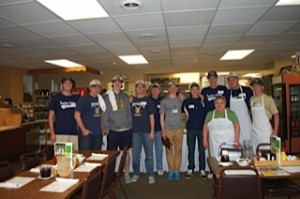 Sunday’s breakfast was well attended by many members of the Providence Academy community. Many students attended the event and came to enjoy breakfast with friends and family. Members from other athletic teams such as hockey, lacrosse, football, and softball attended the fundraiser. The event had a great atmosphere, and even one of the varsity players asked a girl to prom by spelling out “PROM?” with french toast. The PA Baseball Booster breakfast is a special event for many of those involved. When asked what the fundraiser means to him, Mr. Doboszenski said I enjoy seeing the players get together and work hard to fund their sport. They learn great restaurant and service work and it also helps with team bonding. This year college freshman Nick Pruden, last year’s only graduating senior, came back to help work in the kitchen washing dishes. One of Mr. Doboszenski’s favorite things about the breakfast and PA baseball itself is, “Watching the growth of the players, not only as baseball players, but as they grow and mature as young men, and become good citizens and good students.”

All in all the breakfast was a great success for Providence Academy Baseball as a whole. Students, family members, and even PA teachers all enjoyed good food and conversation in support of PA baseball. Mr. Kevin Tapani, Providence Academy Varsity Baseball Head Coach and former Minnesota Twins pitcher, commented how he likes to see the Providence Academy community come together and enjoy the breakfast. Thanks to the hard work of the PA Baseball Boosters, the baseball players, coaches, and especially the people of Dobo’s Cafe & Bakery it was another great breakfast enjoyed by all.