Every March the most anticipated event in college sports occurs; it’s the end of the season men’s college basketball tournament. The 68 team tournament is often referred to as March Madness, or the Big Dance. The 68 teams are slotted into a tournament bracket, which millions of people attempt to predict the final winner. Bracketology is a commonly used phrase when attempting to predict the winners and losers of this tournament. Bracketology is the process of predicting the field of college basketball participants in the NCAA Basketball Tournament and subsequently the process of predicting the winner after the selection committee announces the field of teams. This phrase was first used to describe the work of Joe Lunardi, currently an ESPN analyst.

The NCAA Men’s Division I postseason basketball tournament is the finale of the entire college basketball season. Only the 68 best teams get invited to the tournament. They are selected by a 10 member NCAA Selection Committee made up of conference athletic directors and commissioners. Of the 68 teams, 32 teams receive automatic bids as a result of winning their post season conference tournaments. After this, 36 teams receive what’s called at-large bids. These at large bids are generally given to teams based on their rankings achieved during the regular season. The committee divides the field into four regions with 17 teams each. Each region is seeded from 1 to 17, and the 16th and 17th seeds in each region play each other to determine the final bracket of 64 teams. After teams start to get eliminated, and only 16 teams are left, the tournament gets real exciting. The field is cut in half after every round, and gradually narrowed to the Sweet Sixteen, the Elite Eight, and the Final Four during games spanning two weeks. The Final Four, or semifinals, is then played the following Saturday with the championship game played on a Monday.

The Selection Committee will pick the field of 68 on Sunday March 15th during a nationally televised broadcast which is always on CBS. Currently, Joe Lunardi predicts Kentucky, Virginia, Duke, and Villanova will be the top seeds in the four regions. Other strong contenders that could do well in the tournament are Wisconsin, Kansas, Arizona, and Gonzaga. Going into the tournament Kentucky is the odds on favorite, they finished the regular season undefeated with a record of 31-0. Overall all the March Madness Tourney is dominated by the bigger conferences such as the big 10, the Big 12, the Big East, the Pac 12, the SEC, and arguably the strongest, the ACC. This year it’s doubtful our own Minnesota Gophers will make the tourney, but look for Upper Midwest teams like Iowa, Northern Iowa, and even North Dakota State to potentially make the tournament. 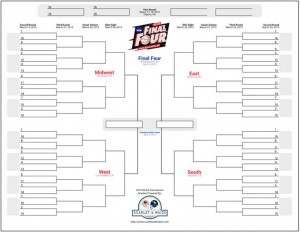 Millions of sports fans around the world fill out March Madness brackets every year. Even President Obama takes time to fill out a bracket. Besides filling out brackets, it’s estimated over $1 billion dollars is spent in gambling on bracket pools. People spend a lot of time on Bracketology and it’s still almost impossible to predict the outcome of every game and have a perfect bracket. In fact, the odds of achieving a perfect bracket are estimated to be nine quintillion to one. Last year Quicken Loans and Warren Buffet sponsored a “Billion Dollar Bracket Challenge” where anyone who picked a perfect bracket would win a billion dollars.

Nobody won the money last year, but the NCAA college basketball tournament is still extremely enjoyable to sports fans and Bracketologists around the world. Providence Academy is a community of very intelligent people, and maybe someone from our school could become educated, or lucky enough, at Bracketology to win the billion dollars.