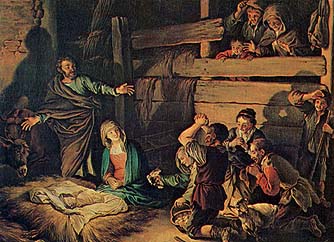 Was Jesus born in December? Many speculate otherwise, but still uphold the tradition of Christmas in December. 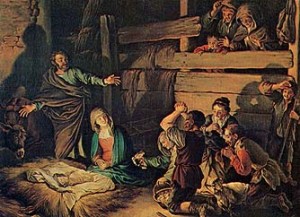 Jon Sorenson, writing for “Catholic Answers,” a blog that defends and explains the faith, responds to the frequently suggested idea that Christmas was celebrated in December to combat all the pagan celebrations, like Saturnalia, Sol Invictus and Mithras, that happened at the same time. Sorenson says, “Saturnalia was the feast dedicated to the Roman god Saturn. Established around 220 B.C., this feast was originally celebrated on December 17.”

With regards to Sol Invictus he says, “The feast of Sol Invictus was the attempt by the Roman emperor Aurelian to reform the cult of Sol, the Roman sun god, and reintroduce it to his people, inaugurating Sol’s temple and holding games for the first time in A.D. 27. A manuscript known as the Chronography of 354 shows the birth of Sol Invictus being celebrated on December 25. Given the fact that the Mithraists equated their god with Sol in one way or another, it is understandable that they may have appropriated the date as their own. The problem for the skeptic is that no evidence exists to suggest that Aurelian was a Mithraist, or that he even had Mithraism in mind when he instituted the feast of Sol Invictus. The connection of Mithra to December 25 is only coincidental.”

He closes by saying, “Whatever month the early Christians might have otherwise chosen, would still place Christmas near some pagan celebration, and oppositional theorists would still be making the same claims.”

The Catholic Encyclopedia states, “Concerning the date of Christ’s birth the Gospels give no help; upon their data contradictory arguments are based. The census would have been impossible in winter: a whole population could not then be put in motion. Again, in winter it must have been; then only field labor was suspended. But Rome was not this considerate. Authorities moreover differ as to whether shepherds could or would keep flocks exposed during the nights of the rainy season.”

The Good News Magazine, in a story titled “Biblical Evidence Shows Jesus Christ Wasn’t Born on Dec. 25” says, “Since Elizabeth (John’s mother) was in her sixth month of pregnancy when Jesus was conceived (Luke:1:24-36), we can determine the approximate time of year Jesus was born if we know when John was born. John’s father, Zacharias, was a priest serving in the Jerusalem temple during the course of Abijah (Luke:1:5). Historical calculations indicate this course of service corresponded to June 13-19 in that year (The Companion Bible, 1974, Appendix 179, p. 200).

It was during this time of temple service that Zacharias learned that he and his wife Elizabeth would have a child (Luke:1:8-13). After he completed his service and traveled home, Elizabeth conceived (Luke:1:23-24). Assuming John’s conception took place near the end of June, adding nine months brings us to the end of March as the most likely time for John’s birth. Adding another six months (the difference in ages between John and Jesus) brings us to the end of September as the likely time of Jesus’ birth.”

Fr. Francis Hoffman, known to many as “Father Rocky” and the Executive Director of Relevant Radio, weighed in on this after I contacted him via email. He said, “We celebrate Christmas on December 25th because that day is 9 months after March 25, the Feast of the Annunciation/Incarnation of the Lord. We celebrate the Incarnation of the Lord on March 25 because the early Christians in Jerusalem believed Jesus died on March 25, and since he was divine and perfect, he had to die on the day he was conceived, having lived exactly 33 years from conception to death.  33 is a perfect number.  So knowing the date of his death, we know the date of his conception, and know the date of his birth.”

Hoffman added, “It is very likely that Jesus died on March 25 as that date can occur after the first full moon after the vernal equinox, all of which is tied to the Passover Event in Exodus and the Paschal lamb. There is documented evidence that early Christians commemorated the Crucifixion of Jesus on March 25.  The earliest calendar that has Christmas on December 25 is from the 4th century; in fact, there is not a lot of documentary evidence before the Edict of Milan in 314 AD, because until that time Christianity was not legal. For those who say that Christmas on 12/25 is simply a Christian appropriation of the pagan Roman festival ‘Sol Invictus’ I don’t buy it for the following reason: Sol Invictus is celebrated on December 20, which is the winter solstice.  December 25 is five days later.  The Julian calendar in force back then was accurate to within 11 minutes per year.  The Christians would not have been four days off on their calculations. There are early Christian Calendars celebrating Christmas on January 6, which is the Feast of the Epiphany.”

He concluded by saying, “But for me, I am convinced that there was a good reason for Christmas on December 25, and it was not the result of guess work.”

Dr. Arthur Hippler, a religion teacher at Providence Academy, says Christmas is not one of the earliest feasts we have, and Christmas, for us, has an importance that it did not have earlier on. He adds that there were no observances of Christ’s birth until about three or four centuries after the fact. “A lot of times we commemorate something in the church perhaps apart from where it is that they actually historically happened, “ Hippler said. He added, “I don’t know that we know that he was born at some other time in the year. There is reason to think that he was born around Christmastime in December, there are arguments for the spring, there are arguments for summer, but none of those arguments are conclusive. And certainly what we don’t want to do is start moving around feast days based on speculative guesswork about when we think Jesus was born.” He concluded by saying, “There is no dogmatic definition of when Christ was born, there is no issue of faith that hangs on this, but there is nothing out there at this point that decisively shows that somehow Jesus was not born in December, but born at some other time, and therefore, in light of that, I think the church wisely keeps the date as it is, and it might even that day as it was even if we did find the evidence.”

St. Thomas Aquinas, in his “Summa Theologica,” states, “Moreover, at that time, when the whole world lived under one ruler, peace abounded on the earth. Therefore it was a fitting time for the birth of Christ, for ‘He is our peace, who hath made both one,’ as it is written (Ephesians 2:14). Wherefore Jerome says on Isaiah 2:4: ‘If we search the page of ancient history, we shall find that throughout the whole world there was discord until the twenty-eighth year of Augustus Caesar: but when our Lord was born, all war ceased’; according to Isaiah 2:4: ‘Nation shall not lift up sword against nation.”

Again, it was fitting that Christ should be born while the world was governed by one ruler, because “He came to gather His own [Vulgate: ‘the children of God‘] together in one” (John 11:52), that there might be “one fold and one shepherd” (John 10:16).”

Christina Stankey ’15 says, “Even though we are unsure Jesus was actually born in December, I fully accept the Church’s tradition of celebrating His birth in December. The most satisfying reason for this that I have heard comes from the relationship between John the Baptist and Jesus. As John preaches to prepare people for the coming of the Messiah, he tells them, “He must increase, while I must decrease” (John 3:30). We see this relationship between them in when the Church celebrates their feast days. John’s feast happens at the summer solstice in June; therefore, the amount of light we get each day decreases after this day. We celebrate Jesus’ coming in December, so the amount of light we get each day increases after his birth.”

We may never know when, exactly, Christ was born, but we do not need to be certain in order to celebrate his birth. Instead, we can focus on the true meaning of Christmas, and spread the good news of his birth.