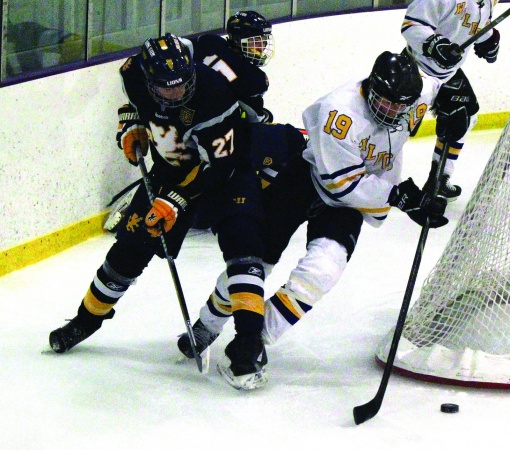 The end of the 2013-2014 basketball season was not  what the men were hoping for, with the Lions falling 43-62 to Brooklyn Center. The team’s goal was to win state and to put up a banner on the gym wall for the first time, but maybe next year. Overall, the Mens Varsity Basketball Team posted their best record in school history (16-11). Top returning players’ stats from last year were: Riley Loew # 15, scoring 9.3 points per game. Dominic Miller #12 scored  7.2 points per game, Matt Richelsen #24 scored  6.0 6 points per game , and Gavin Blomberg scoring 5.7. The Lions are looking for better results next time around. Junior hoops Captain Dominic Miller said, “I’d say an expectation we have is to win at least 20 games. We lost three great seniors but have improved our depth, we are not just a five man team. We are still getting some kinks out but are very excited for the season.” Come and support the boys this season and fill the stands!

Down the hall in Gym B you’ll find the Lady Lions preparing for their first contest at Orono on  Tuesday, December 2. The girls got off to a slow start with a 1-9 record, but finished the last  15  games with 12 wins and 3 losses. Top returning players stats from last year were: Makenzie Murtha #20 scoring 11.1  points per game, Sophie Koeppl #1 scoring 10.6, Clara Counts #44 scoring 4.6, and Taylor Miller #2 scoring 5.8.  Senior Captain Makenzie Murtha was asked about the team’s outlook this year and she said,“The expectations for the basketball season is to go as far as we can and to reach our goal of going to state. The team looks young but a lot of potential. I’m excited for my senior season!” By the way after a double knee replacement surgery, former PA custodian John Weber joins the girl’s coaching staff along with Coach Waldo. Welcome back Coach Weber and good luck Lady Lions!

The Womens Hockey program is teaming up with Minnehaha High School and the combined squad will be  called “Minnehaha United”. Elsa Deinema and Lauren Schrommer are representing PA. A new season of mens  hockey has  begun with a 1-1 record so far . The 2013-14 season  started out 1-10 and finished with six wins. Top five PA returning players stats from last year: #19 Tyler Tessman with four goal and 7 assists, #15 Ben Snellman two goals, six assists, #5 Ryan Hoogenakker- four goals, three assists, #27 Luke Tapani- two goals, three assists, #21 Blake Lucking and Colton Murphy each with one goal. Team Captain Tyler Tessmansaid “I think that the hockey team will go farther than we did last year. The team is very young with a lot of sophomores and freshman getting ice time. We will be able to learn valuable lessons this year and put forth our greatest efforts to win games”. There are ten home games at the Plymouth Ice Center, come out and support the “Pucks”.