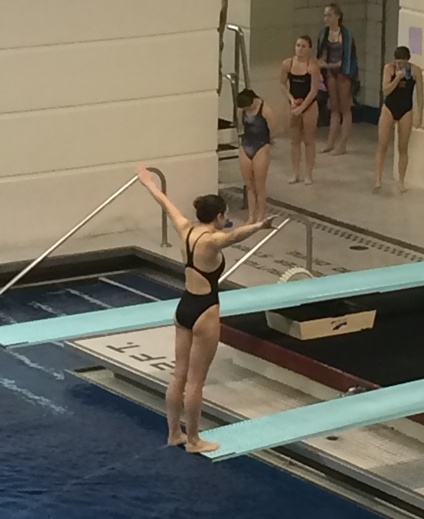 On November 14th, junior Megan White won the women’s Class A State Diving Championship. She scored a 415.35 to upset last year’s champion, Bailey DuPay of Northfield,  who also won state the two years before.This was White’s first state appearance for diving and so she was a new face in the competition. The championship was full of anxious waiting but the win gave her  a sense of relief, and  was the capstone to an amazing season. White won many meets and broke  several records this year.

“It [the state meet] was nerve wracking throughout the meet. But it was so exciting knowing I won and was also really relieved,” White said. , “This year I broke  four  records which were the true team sections meet record, the section meet record, Blake’s  six  dive school record and Blake’s 11 dive school record.”  This year, Providence switched from  partnering with Osseo to Blake. This new  arrangement with Blake has helped White grow as a diver. “This year has been great in switching our co-op to Blake,” said White, “mainly because we had a really experienced coach which helped me learn a lot and become a much better diver this year.”

White has been diving since sixth grade. She had been in gymnastics since she was five but had to quit recently due to injuries. She is also no newcomer to statewide competition. Last year she went to state for track and field for the triple jump.“I started diving in the summer of 6th grade and then started diving through Providence in 8th grade,” said White, “I went to state for track last year in triple jump and placed 11th.  My score was 415.35 and the second place score was around 400.”