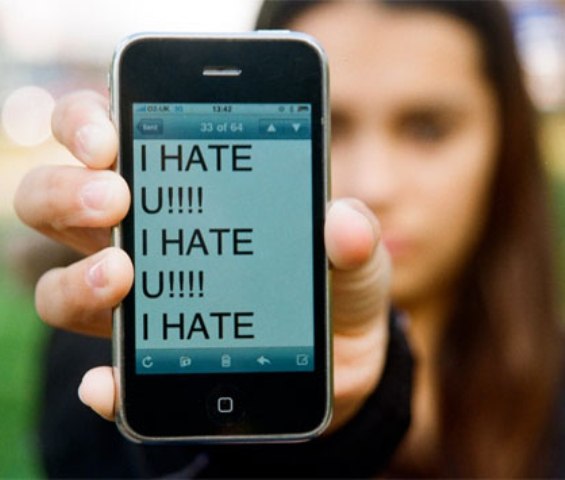 Cyberbullying has become a huge issue with the rise of technology, but with the help of new laws and social media crusades, it is well on its way to being stopped.  With the 21st century came Facebook, Twitter, Instagram, Vine, Tumblr, Snapchat, not to mention the rise of video games and texting.  When constantly behind a screen, people don’t have to communicate their ideas and emotions personally, making it easier to act without immediate consequences.  It becomes easier to send a mean text message, or to write a “funny” tweet at someone else’s expense.  Although cyberbullying has been fairly easy to get away with in the past, various accounts on social media have been made to expose these bullies.

Take the Instagram account, “@byefelipe”, for example.  This account, started by Minnesotan Alexandra Tweten, humorously calls out men who turn nasty when rejected by women online.  According to Tweten in an interview with the Star Tribune, the responses have been very positive. “I’ve gotten tons of thank-you notes from people, just e-mailing or messaging me on Facebook, saying, ‘Thank you so much for putting these guys on blast and for putting this out in the open,’” says Tweten.  “I’ve gotten messages from women saying, ‘Thank you.  Now I know I’m not the only one who gets these.’  I’ve gotten apology messages from guys saying, ‘I’m sorry on behalf of my gender.’  The response has been really positive.”

But Tweten is not the only one to fight against cyberbullies.  More notably, former Clinton White House intern Monica Lewinsky made a Twitter account and has been speaking out about online harassment.  In Lewinsky’s speech at Forbes’ 30 Under 30 Summit in Philadelphia, she says, “What does it actually feel like?  What does it really feel like to watch yourself — or your name and likeness — be ripped apart online?  Some of you may know this yourself.  It feels like a punch in the gut.  As if a stranger walked up to you on the street and punched you hard and sharp in the gut. […] Thankfully, people aren’t punched every day on the street.  But it happens all the time on the internet.  Even as I’m talking to you now, this is happening, to someone online.  And depending on what you guys are tweeting right now, it may also be happening to me later.”

According to cyberbullying statistics from the i-SAFE foundation, over half of adolescents and teens have been bullied online, and about the same number have engaged in cyberbullying; more than 1 in 3 young people have experienced cyber threats online; over 25 percent of adolescents and teens have been bullied repeatedly through their cell phones or the Internet; and well over half of young people do not tell their parents when cyberbullying occurs.  Outside of social media, there are innumerable campaigns, councils, and laws to prevent cyber bullying.  49 States in America have laws against bullying, and in 20 of those States cyberbullying is a downright crime.

But kids at Providence Academy also have their own solutions to how they think cyber bullying can be prevented.“Cyberbullying is a problem but I think it can be remedied if people choose to treat each other with the true dignity and respect that is deserved,” says Lucy Buehler ’15.  “A person can only give respect if they have it for themselves, so I think that would be a good place to begin fixing the problem.” Maria Vogel ’15 agrees.  “Simply by living in charity and kindness we can prevent cyberbullying,” says Vogel.  “…Instead of living in a world of Facebook friends and followers, we should live in a world based upon genuine friendships and relationships.”

Cyberbullying is still a widespread problem in today’s technological era, but hopefully as thousands of people work to get rid of this problem, it will be wiped from our world’s hard drive.