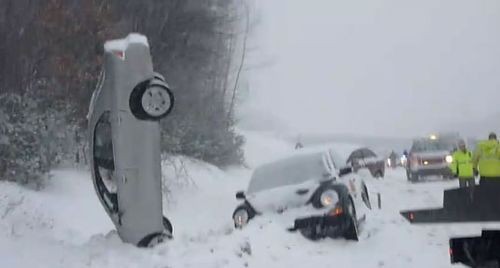 The unchangeable laws of physics for winter driving create dangerous situations for drivers. Everyone knows the danger of ice and snow, however, few understand why and how to safely work with them.

Driving in winter begins and ends with friction. As an article from Cornell University on winter driving states, “friction, between the tire and the road, is the most important ingredient in driving safely.” While driving on a clear road, the pavement grips the wheels to slow the vehicle down and speed it up. However, throw a layer of ice on top of the pavement, and there’s no longer any grip. This is when skidding occurs. Without much friction, the braking force is reduced while the stopping distance of the vehicle is increased. Friction also comes into play while making turns. “Force that keeps the vehicle in the wheel path is called side friction,” says Cornell University. If the breaking friction is reduced, then so too is the side friction. This means that when the sideways friction exceeds the breaking friction, the vehicle will spin out of control.

The best way to avoid that situation is to simply slow down. Driving at a faster speed then conditions allow, will also get one in trouble when trying to stop.  For the average person, according to Cornell University, it takes 2.5 seconds to react to a situation. On normal condition roads, this allows the vehicle to have plenty of time to stop. However, when the conditions are a little slicker, or when ice has covered the pavement, the breaking distance is six times longer than that of a dry road. The diagram below displays this immense difference.

Stopping is indeed crucial and each vehicle is most likely equipped with tools that will help while driving in dangerous conditions. However, 4-wheel drive, as many believe, is not one of them. Four-wheel drive will improve the vehicle’s power to push forward and the driver’s steering control is improved, however, the braking system on a 4-wheel vehicle is no different from that of any other.

Anti-lock brakes are no doubt a better solution for safe stopping. Mr. Michael Plucinski, a physics teacher at Providence Academy, explains in detail what anti-lock brakes can do. The key to braking is for the wheels to be able to grip the ground to create friction, but to remove them before they can lock up and slide. When the brake pedal is held down, anti-lock brakes begin a quick pumping motion. This is equivalent to a car without anti-lock brakes where the driver presses down on his brake pedal and releases it in quick intervals. Anti-lock brakes imitate that action only at a much faster speed. Although this does help steer the vehicle and stop for effectively, the stopping distance could be lengthened, so slowing down would not be a bad idea. Although all this new knowledge and these tips are helpful, it is still dangerous to be out driving in a winter wonderland. As Mr. Dan Fisher, also a physics teacher at Providence Academy, said, “Physics impose certain limits, and no matter how good you think you are, you can’t stop nature.”  Although slowing down and taking time may not seem appealing for most drivers, it will ensure that everyone arrives safely to their destination.