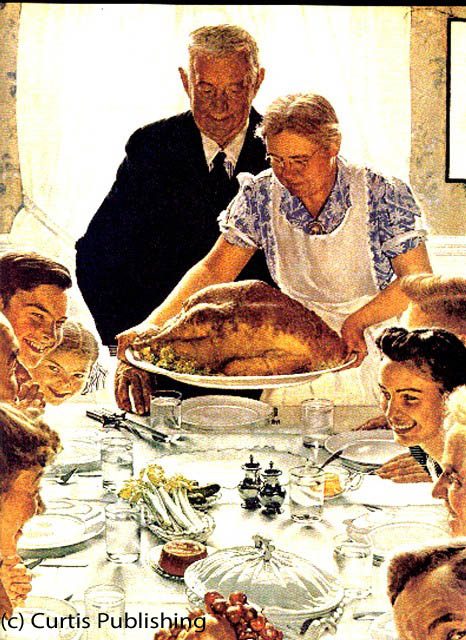 In 1621, a group of Pilgrims and Wampanoag Indians sat down to a feast of venison, native fruits, local vegetables and possibly fish. It may come as a surprise that turkey, potatoes and pumpkin pie were not present at this very first Thanksgiving meal.

When asked how she usually celebrates Thanksgiving, Lucy Buehler ’15 responded, “All of my cousins, aunts and uncles and grandparents on my mom’s side of the family come over to my house.” She added, “We have all of the classic foods like turkey, cranberries, mashed potatoes, stuffing, pumpkin pie, et cetera.”  But when did these foods become “classic?”

According to Joanne Camas, writer for the popular Epicurious blog, the Pilgrims and the Wampanoag Indians who sat down to the feast did not taste any of the foods we usually enjoy today. “Instead, the table was loaded with native fruits like plums, melons, grapes, and cranberries, plus local vegetables such as leeks, wild onions, beans, Jerusalem artichokes, and squash. (English crops such as turnips, cabbage, parsnips, onions, carrots, parsley, sage, rosemary, and thyme might have also been on hand.) And for the starring dishes, there were undoubtedly native birds and game as well as the Wampanoag gift of five deer. Fish and shellfish were also likely on the groaning board.”

“Bet You Didn’t Know,” a video on www.history.com, further describes this feast by saying, “The first Thanksgiving in 1621 wasn’t just one big meal, it was a three-day festival of eating, hunting and other entertainment in honor of the Pilgrims first successful harvest.” However, Thanksgiving didn’t become an annual tradition until 200 years later!

Mr. Edward Hester, a history teacher at Providence Academy, said, “During their first winter in Plymouth, the Pilgrims suffered greatly. Cold and sickness killed all but 44 of the original 102 who had come over on the Mayflower in 1620. Beginning in early 1621, the survivors received much needed help from local Indians. Squanto, an Indian who had been kidnapped and taken to England a decade earlier, translated for the Pilgrims. Massasoit, the chief of the local tribe, signed a treaty ensuring peace between Pilgrim and Indian for decades to come. The Indians taught the Pilgrims how to fertilize the soil with dead fish, which led to an abundant corn crop. That fall the Pilgrims, as part of their English custom, held a harvest festival, thanking God for His many blessings. The Indians were invited and the two cultures joined in several days of feasting and games. The menu was most likely one of wild fowl, berries, and root vegetables.”

Mr. Ian Skemp, also a history teacher at Providence Academy, said, “Well, as far as I know, the infamous “First Thanksgiving” lasted several days, and there was plenty of meat, such as venison and fowl (ducks, maybe wild turkey). That may sound pretty nice, but remember there was no pumpkin pie, no wine, no cranberry sauce, no after dinner cigars, coffee, or liqueurs, and no potatoes. Probably the worst part was that these Christians did not celebrate Christmas. After Thanksgiving, it was just winter.”

In reality, we haven’t been eating like the Pilgrims and the Indians at the first Thanksgiving at all! More importantly though, is the fellowship we share with friends and family. So, fill up on the classic Thanksgiving food, and maybe try some venison if you want a change from the turkey!

In a medium mixing bowl beat half of an 8-ounce package cream cheese, softened; 1/4 cup softened butter; and 1 teaspoon vanilla with an electric mixer on medium to high speed until light and fluffy. Gradually add 1 cup sifted powdered sugar, beating well. Gradually beat in additional sifted powdered sugar (1 3/4 to 2 1/4 cups) until frosting is of spreading consistency.

Prepare as above, except substitute one 15-ounce jar applesauce for the pumpkin.

To store: Cover and store in the refrigerator up to 3 days. To freeze, wrap unfrosted, uncut bars in heavy foil. Freeze up to 3 months. Thaw; frost and cut into bars.