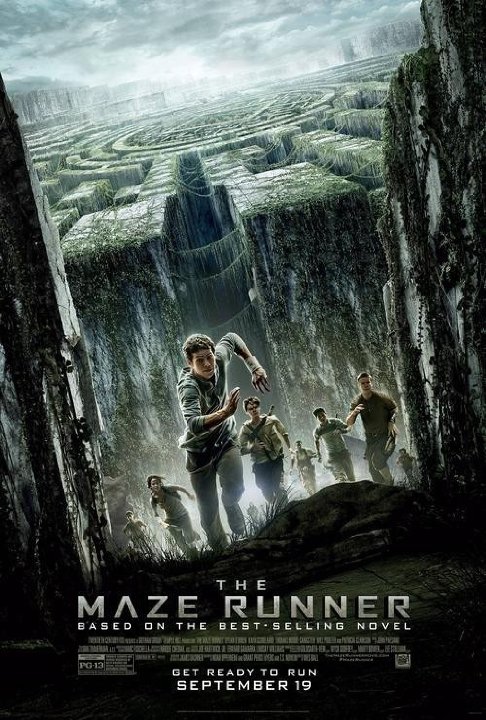 “What is this Place?”

The Maze Runner, a film adaptation of the book The Maze Runner, has recently hit the theaters and is one of the biggest, most-watched movies in America. The story follows the character Thomas when he  who wakes up in a service elevator from deep in the ground underground, with no recollection of how he got there or of his past. He is met by a group of boys in an enclosed area surrounded by four giant stone walls that have openings in them. He is told by the other boys that they are in the middle of the maze in a place they call “The Glade”.  He learns that they have tried to find a way out for three years but to with no luck. All it seems that they know is that the maze closes at night and that there are terrifying creatures in the maze called “grievers”. Thomas tries to enter the maze but is told that only boys called “runners” are allowed to go into the maze and find a way out. He later becomes a runner and helps in figuring out how to get out of the maze and find out why they’re there and who put them there.

This movie is among other movies set in a dystopian world. The movie is a mix between The Hunger Games and Lord of the Flies. With the main character having information revealed to him at the same time that it is revealed to the audience, brings a sense of anticipation and makes it unclear what twists and turns the story will take. The movie does an excellent job of taking James Dashner’s story and putting it on the silver screen. The book translates perfectly into a movie with little being left out or added into the movie.

The Maze Runner is an action thriller that will capture your attention from the beginning until then end. It has moments of humor but has overall dark tones a dark tone dominates. The plot has just as many turns as the maze, which that leave audiences unsure of what to expect next. The acting was well done by a group of young actors that bring the audience into life in the maze. All of the actors have a brotherly bond with each other and throughout the movie, they look out for each other. This can be attributed to the director, Wes Ball, and his faithful interpretation of Dashner’s original text. , who brought the words of James Dashner to the silver screen. The maze is brought to life by stunning visual effects and sets. As Thomas runs through the maze, you feel like you’re right beside him running through the twists and turns of the maze. Throughout the movie the actors show more and more of the characters personalities and their fears. The character development adds intrigue and unknowing.

The Maze Runner will thrill, intrigue, and keep you on the edge of your seat throughout its 113 action packed minutes. This is a good movie to go to whether you are familiar with the story or not.