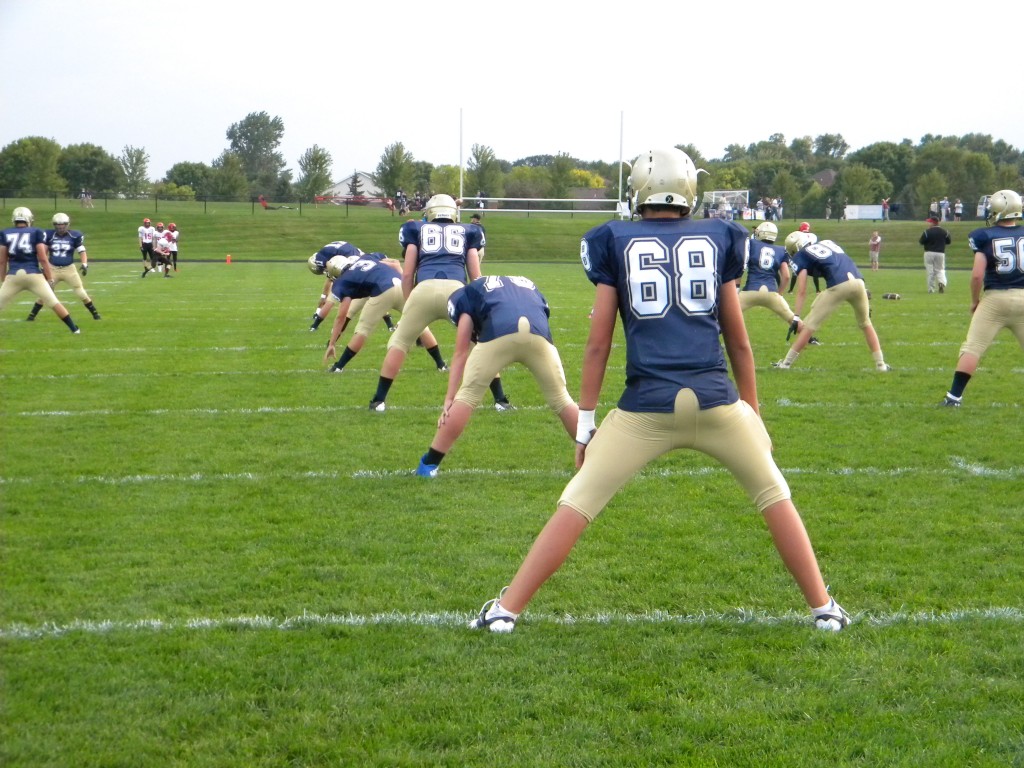 The Providence Academy Boy’s Varsity Football team is off to a great 3-0 start this season. Recently, Jim Paulson, sports writer for the Minneapolis Star Tribune wrote about the Lions football team. “Back off the mat: Providence Academy established itself as a consistent winner compiling a 33-8 record in five seasons before slipping to 4-5 last year as Derek Asche move into the head coaching position.  With 19 starters back, led by  RB/LB Ryan Richelsen and QB Henry Van Dellen, the Lions look poised to get back to their winning ways and prove that the 2013 season was a hiccup. AP poll has the Lions tied for third with Plainview-Elgin-Millville in class AAA.”

I caught up with senior captain linebacker/guard Ryan Ylitalo, who said “What’s special with this team is the bond we have with each other. From senior to freshman we know we can rely on each other. We’re not just a team, we are a family of brothers. We are hopeful for a good season this year as a team and will walk away with great memories.”

Junior quarterback and second year starter Henry Van Dellen said “This team will go undefeated and you can take that to the bank.” Bold statement, however the Lions are playing like a team who could do so. Come and support the Lions as they travel to Gordy Aamoth Stadium this Friday September 19th to take down the Blake Bears. Kickoff is at 7 pm. It’s Blake’s homecoming, please arrive early and pick out the best seats in the stands!

Providence Academy begins with a new athletic conference called the Independent Metro Athletic Conference. There are six schools that make up IMAC; Blake, Breck, Minnehaha Academy, Mounds Park Academy, Providence Academy and St. Paul Academy.  These schools broke away from the Tri Metro Conference last year.  The IMAC’s reason for breaking away was “…to achieve independence for their scheduling needs while maintaining a working relationship with schools of similar size and demographics.” However, next season’s schedule will be revised again due to district scheduling for all Minnesota schools.

All of the Providence families had high hopes for the new turf field, stands, concessions and restrooms for the 2014 Lions football home games. However Mother Nature did not help this summer and it’s looking like next season. The project was originally planned that the football stadium would be completed by October 15th. Due to the delays,  football games are being played on the soccer field on Saturdays instead Friday nights for this season. The dome is expected to be inflated by December 1st. Plans for the field house are still in the works but should be finalized soon. Construction on the field house will begin in the spring of 2015.