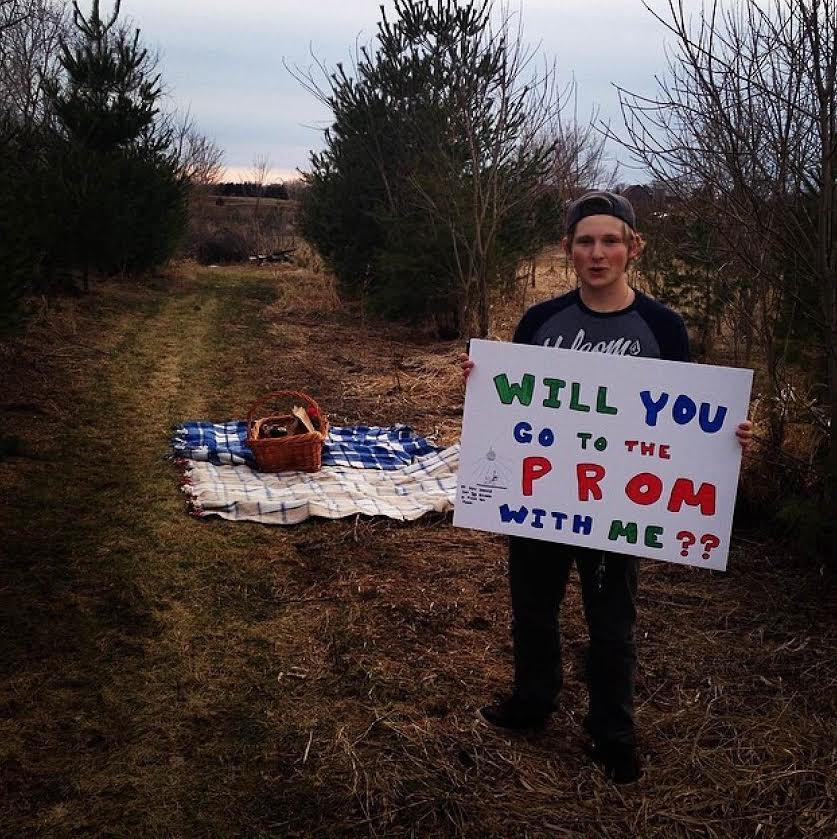 Long gone are the days when a simple, “Will you go to prom with me?” would pass as a satisfactory method of asking your date to the dance. Along with the added stress of hoping your date says yes, prom proposals have arguably become just as important as the dance itself.

Henry Hose ’14 states, “It’s just the standard that the guy has to be creative. It becomes kind of a competition between the guys for who can do it the best.”

This cancels out the option of guys repeating proposals from  previous years. Hose believes that a weak proposal could send the wrong message.

“Proposals show how much the guy cares about who he’s asking,” he said.

This year, the junior and senior guys have been successful, taking their creativity to the next level.

First time prom goer Cole Norell ’15 surprised Evyn Schmidt ’15 when she received a phone call from Norell, who gave her directions to follow.

“He led me to a little path, and there he was with a picnic set up and flowers,” said Schmidt.

Along with the element of surprise, Norell knew that food was a great way to secure a date.

“He got Noodles mac and cheese, plus guacamole because those are my favorite foods. I think that it was really cute because it was nice to be outside in the Spring weather, and we got to spend time together after he asked,” said Schmidt.

Kate Pulles ’14  helped out with the prom-proposal, telling Lerum that they were on their way to a friend’s house.

“We were driving down a dark dirt road and it was really creepy. I told Kate to lock the doors when we saw smoke just down the road; It looked like a scene from a scary movie,” states Lerum.

Waiting for her there, was “prom?” spelled out in fire on the road. Leggott had carved the word into the road, and put tinfoil and coals in the letters. He then lit it, and Lerum, impressed with the creativity, said yes.

Whether you like extreme, romantic or funny proposals, having a creative method for asking a girl to a dance is a way to ensure a date and a fun night.