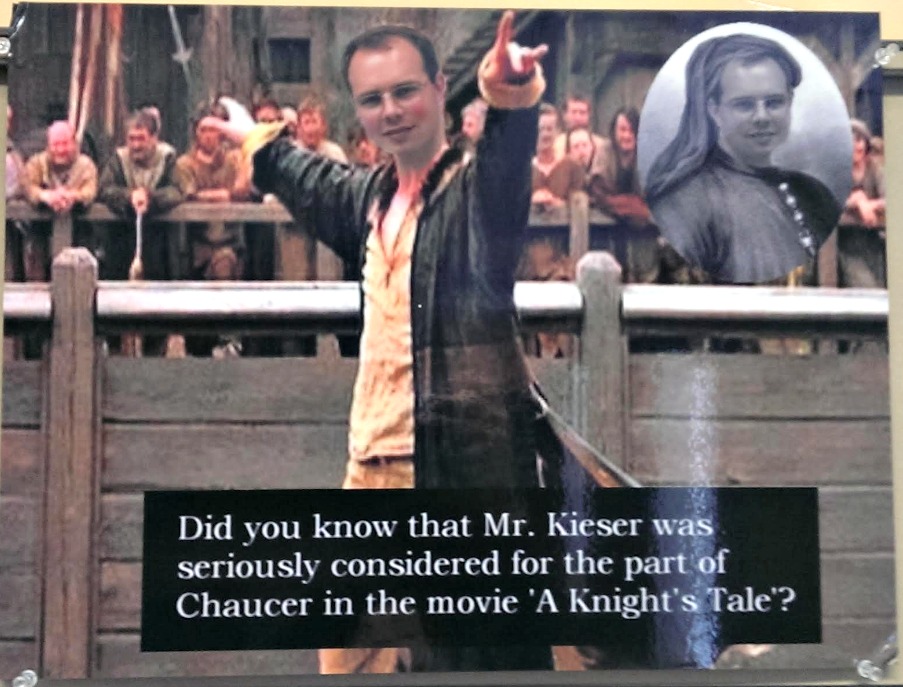 On April 1st, History teacher Mr. Kevin Keiser found a rather quirky surprise. Adorning his door was a poster featuring a picture of him that stated, “Did you know that Mr. Keiser was seriously considered for the role of Chaucer in the movie The Knight’s Tale?”

“There were two pictures of Chaucer: one historical portrait, and one from the movie (The Knight’s Tale),” said Mr. Keiser. Both of the pictures had my face on them, and one of them had a sort of “swag” posture.”

Sadly, Mr. Keiser was not actually considered for this role. In actuality, this was an April Fools prank conspired by Lower School Art Teacher Mrs. Mary Buffie. This April Fool has allegedly been pulled on previous first year teachers, including one other history teacher, Mr. Ian Skemp. Mr. Keiser said that a week after the prank, he decided to actually watch the movie. He said he, “appreciated its comedy as well as its historical references.”

“I started making these posters my first year when I decided Dr. Flanders needed to have an April Fools prank for no particular reason other than I wanted to test his sense of humor,” said Mrs. Buffie. “I then went on to a few other teachers who I thought could use a smile or chuckle.”

She says that when someone has been pranked by her, they have been “Buff’d”.

“I would like to think the Holy Spirit inspires me to make others smile, but I may just have an odd sense of humor,” said Mrs. Buffie.

Mr. Keiser  said that he thought it was definitely funny, and mentioned that he still has the poster hanging in his room.