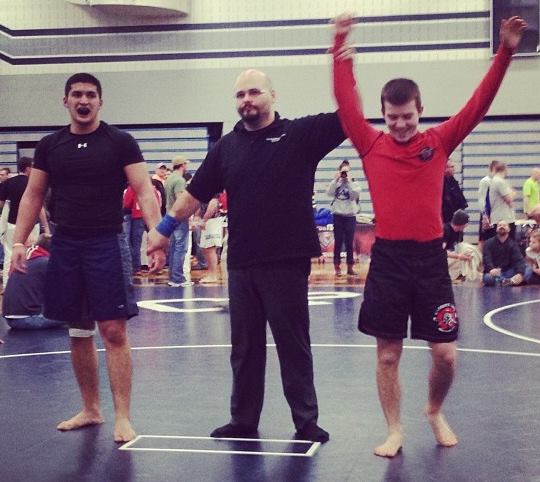 Marcus Beddor ’15 started scoring boxing matches with his brother when he was in middle school.

Instead of boxing, though, the high school junior Jiu-Jitsu student training at M-Theory Martial Arts uses chokeholds and joint locks to defend against his assailants.

Training at his St. Louis Park based gym for three hours every evening, Beddor has dedicated the past three years of his life to a sport that he says has changed his life.

If you follow Beddor on any form of social media, you can see his sport requires him to travel the United States for various tournaments. Destinations have included Florida, Nevada, Wisconsin, California, and Illinois. He has won awards at almost every event.

Beddor is a dedicated Jiu-Jitsu student who is a three time gold medalist, five time silver medalist, and one time bronze medalist. The 135 pound Beddor says he once even took down a 256 pound assailant, which has given him a new sense of confidence.

Beddor says he enjoys using arm bars against his opponents.

“I hit them from different angles,” said the outgoing Beddor. “I slate their arm and hyperextend it slowly. You use your hips.”

Beddor recently switched gyms in order to train more heavily and compete at a higher level. He says that he has taken to his new teammates quickly and loves to learn from them.

“I’m on the bottom of the barrel,” Beddor said regarding his skill level compared to his teammates.

Although he makes sure to be careful when he competes, he has had one considerable injury while taking on an assailant. He fell on his thumb and he said he immediately knew it was torn.

“I finished my match, though,” Beddor said. “It was agony.”

He ended up tearing everything in his thumb, some in his hand, and some in his forearm. He took his cast off too early and it hasn’t healed properly, something he says that he just has to deal with.

Jiu-Jitsu is known for changing people’s lives, and it has done just that for Beddor.  He says that through experience and the art itself, he has learned to be humble as well as confident.

“You have to flow with the go, not go with the flow,” Beddor said. “Whatever life throws at you, take it, and then bend it to what you want it to be.”