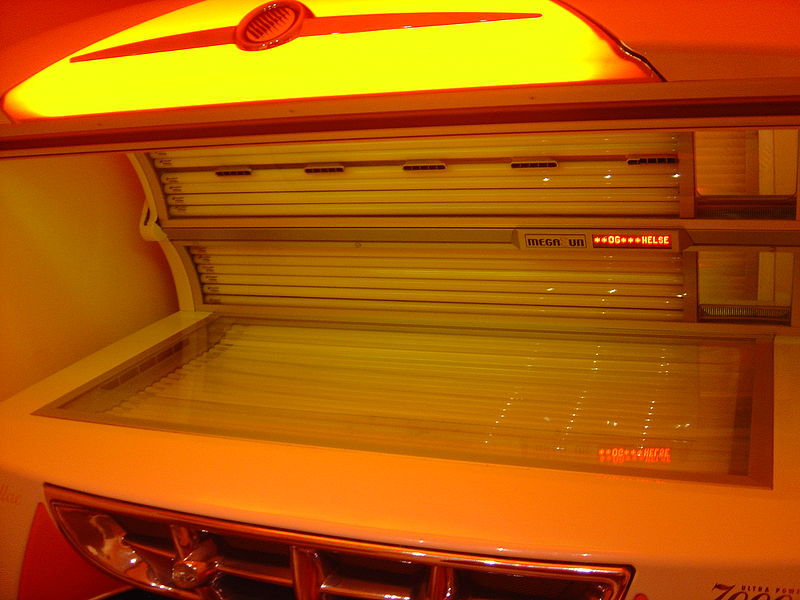 Today, lawmakers in Minnesota are discussing a new bill that could limit who can use tanning beds. Also known as the “Tan Free Teens” Act, it proposes that you must be 18 years old or older to use a tanning bed. It may also require tanning companies to post warnings on each tanning bed that would say “Danger: Ultraviolet Radiation” and warn about overexposure. Five states have already banned anyone under 18 from using tanning beds: California, Illinois, Nevada, Texas and Vermont.

Why are lawmakers proposing such a bill? Debunking the myths behind tanning may help you to understand why it may be limited for those under 18.

Myth #1: Tanning beds are safer than outdoor tanning: The Centers for Disease Control and Prevention says that you can still get a burn from tanning indoors, and even a simple tan of any kind indicates damage to your skin.

“The one and only time I went tanning, I went in for seven minutes on a low setting, and to sum things up, I almost used a whole bottle of aloe afterwards,” Alexis Brown ’15 said. “My skin tone was the same as Elmo’s and it was excruciatingly painful.”

Dermatology Daily also suggests that tanning indoors may be more associated with melanoma than sunburns.

Colleen Irwin ’14 says that the issue hits home for her because her mother had her skin cancer removed recently that she got from too much exposure to UV rays.

Multiple studies have showed a relationship between UV exposure and a risk of skin cancer, according to the Journal of the American Academy of Dermatology.

Myth #2: If you get a base tan before vacation then you are completely free from skin damage: You’re probably less likely to get burnt, but your skin is at the same risk.

Anna Clipperton ’14 thought that if she didn’t wear sunscreen on her first day in the British Virgin Islands, she would have a nice base tan for the rest of her trip. She found out how wrong she was the hard way.

“I had second degree burns and blisters on one side of my face and my back,” she said.

The World Health Organization says an indoor tan offers minimal protection against sunburn. In fact, you’re pretty much getting a head-start on your DNA damage before you go on vacation.

Myth #3: You can’t get sunburn on an overcast or cold day: Even on the cloudiest day, you should still apply sunscreen. Clouds only filter 20% of UV rays, which means 80% are still penetrating your skin. It is always best to apply sunscreen at least 20 minutes before going out in the sun, no matter what the weatherman says.

When Hanna Jennings ’15 was in Florida last Spring Break, she figured she would’t need to wear sunscreen because it was raining outside. She was painfully wrong.

“I ended up getting second degree burns all across both legs, my chest, face, and back,” she said. “I had to stay in bed two whole days, and my mom ended up having to soak towels in ice and wrap me in them to get the burn and fever to go down.”

Myth #4: Tanning is healthy because it protects the body from sunburn: Having a tan is like having SPF 4 sunscreen on. Keep in mind that SPF 15 is the recommended usage.

“Anyone who is a daywalker like me just has to accept that they won’t get a tan unless it’s fake, and sunscreen is an absolute must,” Nickoloff said.

Whether you are indoors or outdoors, UV exposure over time causes wrinkles and a leathery look. Using a tanning bed induces a DNA skin mutation known to be linked with photo aging, according to the Journal of Investigative Dermatology.

“That convinced me never to go in a tanning bed again and to be more adamant about using sunscreen,” she said. “I also realized I don’t want wrinkles when I’m thirty!”

In Aging Cell, they reported that UV radiation exposure from the sun sped up the accumulation of DNA skin mutations associated with premature aging.

Myth #5: Tanning is a great way to get vitamin D: The best way to get Vitamin D is through diet and supplements, not tanning. Exposing your skin to the sun for a maximum of 10 minutes a day without sunscreen is recommended by some experts as a way to produce enough Vitamin D, but others don’t agree that’s best. Even with sunscreen on, you can still produce some Vitamin D.

Anna Clipperton said that she thinks teenagers need to look to see how things like tanning can affect their future instead how things can benefit their present state.

“Know the difference between getting a healthy amount of natural sunlight and Vitamin D and getting fake, damaging UV rays,” she said.

Vitamin D replacement can be obtained by taking a supplement without risk to your skin. Dietary sources include milk, cereal, yogurt, and orange juice that are full of Vitamin D as well as salmon, mackerel, and tuna.

Next time you go to the beach for vacation, wear a floppy summer hat or stay in the shade, like Paige McAuliffe ’14 had to do when she got burnt so bad that her friend and she had to stay inside and ice their backs while they were in Italy.

Even better, embrace your natural complexion! If you insist on tanning, wear a broad spectrum sunscreen of at least SPF 15 and avoid sun exposure between the hours of 10 a.m. and 3 p.m. Be sure to also apply sunscreen 30 minutes before going out in the sun and every two hours after while you are exposed.

Kate Pulles ’14 summed up the great tanning debate when she said, “I don’t think it’s worth sitting in a bed of radiation to look tan.”