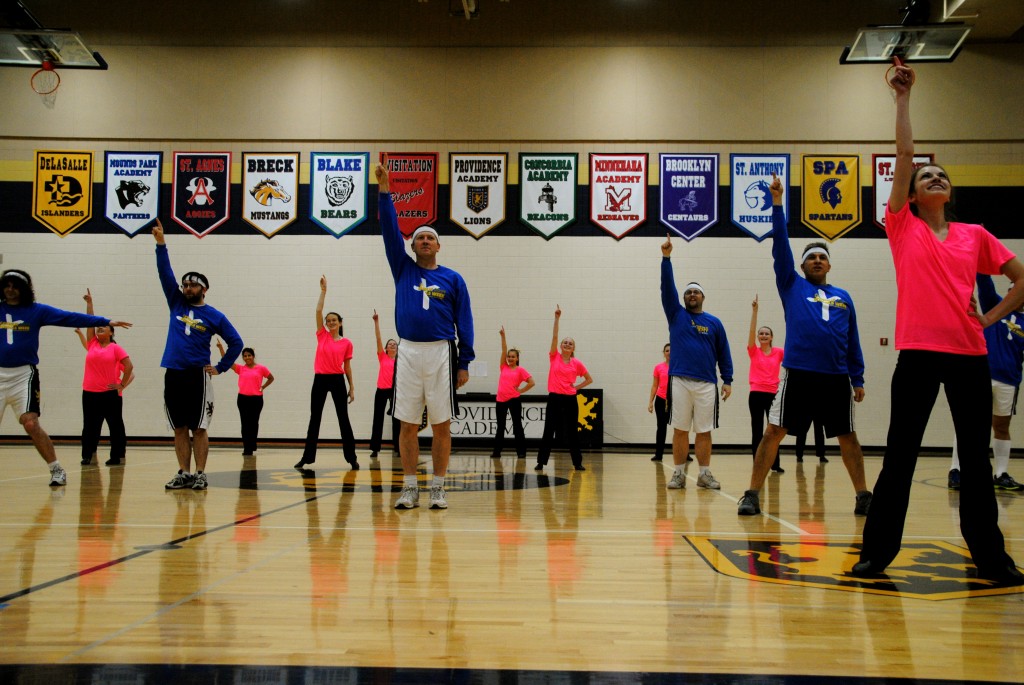 Upper School Students had a big surprise during Wednesday’s Catholic School’s Week Pep Fest.  Following a series of videos and competitions, the Spirit Squad performed new dances, and this time, they brought some special guests.

Unknown to the students prior to the Pep Fest, ten of the male upper school teachers joined in part way to dance in the medley of songs from High School Musical.  The daring performers were named “Dr. Fer and his Upper Steppers” by Mrs. Cathy Quinn, who coaches the Spirit Squad. The special guest teachers, with nicknames by Mrs. Quinn, include:

BB “got your back” Blackhawk
Ian “secret ninja moves” Skemp
D. “without a net” Fisher
Mike “more than a fro” Plucinski
Christopher “smooth operator” Santer
Ricky “sure can sing” Carrillo
Kevin “the new guy got game” Keiser
Adam “who let the dogs out?” Schmalzy, and
Tom Cat Jones.
According to Dr. Ferdinand, Mr. Harman was originally supposed to be among the dancers, but could not join due to “car troubles”.
Following the Spirit Squad’s performance to “Fabulous”, the teachers turned performers ran into the gym  to “The Boys are Back”. Both songs had original choreography by Spirit Squad Captain Stefanie Palmer ’14.
For the finale, the Spirit Squad returned to join the “Upper Steppers”  for “We’re All in This Together”, with “authentic movie choreography”, according to Palmer. But this surprise didn’t come without a bit of work. Palmer says that the teachers have been practicing for about a week, but they only had one practice together, which took place in the closed-off antiquities gallery with signs about a meeting on the doors.

Reflecting back on instructing the teachers, Palmer says, “It was really strange… I saw them in a less professional light. It was weird, but it was really fun.” According to her, math teacher Mr. Ben Blackhawk was the best dancer of the teachers because he had ballet experience.

Mr. Ian Skemp, history teacher, also got an honorable mention because he “gets really into it, and he adds his own style.”
Upper School Director Dr. Kevin Ferdinand’s experience of being taught by his former students was different than Palmer’s, however. He says, “It was stranger for her than it was for us”. He thinks that age doesn’t matter, and in the end “She knows something we don’t”.
In the end, after all the secret-keeping and dance-practicing, the surprise was well received. As the teachers ran into the gym in shorts, t-shirts, and sweatbands, they were greeted with a chorus of cheers and applause from the student-packed stands.
Faith Bartsch ’14, after seeing the performance, said she was “amazed”. “It was great to see that our teachers could appreciate this week as much as we can,” said Bartsch.