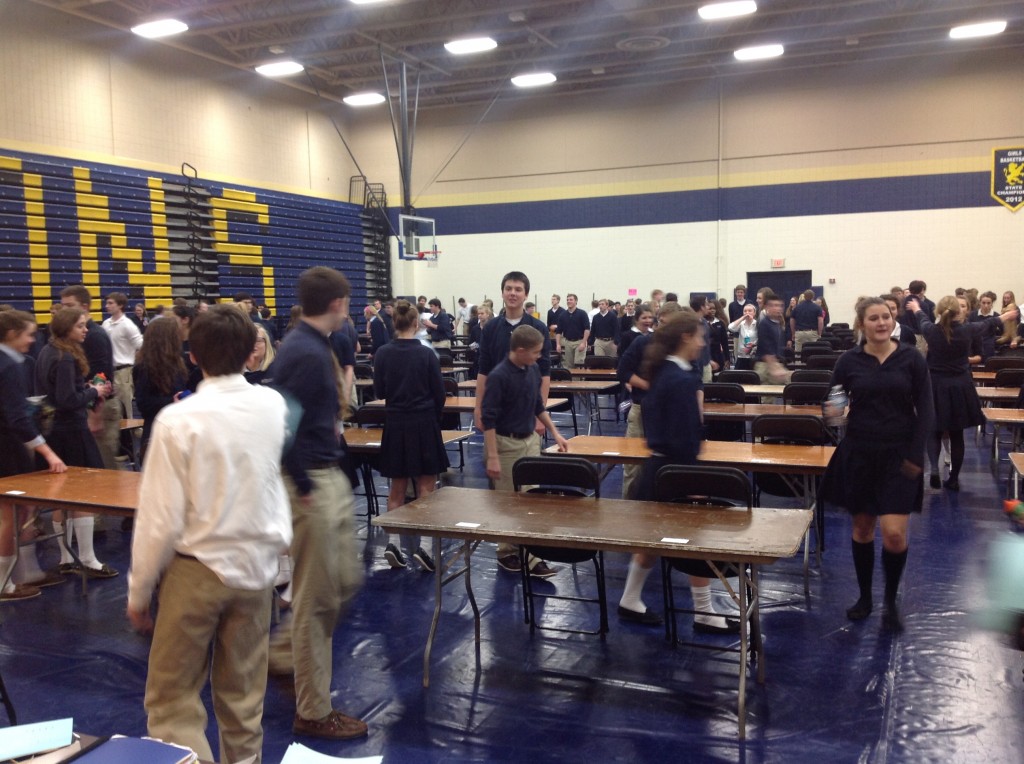 Congratulations Freshmen! You have officially completed your first semester of high school and have survived the first six out of the total forty-eight final exams you will take at Providence Academy.

I suggest that you make yourself comfortable in this midst of school wide panic and learn to love those blue coated floors that make the gym unrecognizable from the spirit games and pep fests also it hosts.

But for the 2014 Senior Class, Friday the 17th marks our last day of testing alongside the rest of the school, as seniors have the luxury of taking their last final exams in the Lecture Hall.

This is one of the perks of being a second semester senior. By now, everyone’s applications are submitted and students either know where they are going to college, or are waiting to hear back from their schools. One’s fate is out of one’s control.

Emily Prom ’14 said, “It’s exciting knowing where I’m going to college already because it makes school more bearable because it makes me have less stress and worry. School is more fun with less pressure.”

On November 7th, few wanted to be one of the four seniors who were up first to present their senior speech. Despite the excess stress, they got through it and can relax while watching all of the others. Even though nothing beats having your speech done, there are some advantages of having it later in the year. The atmosphere in the room is more relaxed then it was the first day.

Does the senior slack exist? After finals, seniors are wondering what to look forward to second semester.

Paige McAuliffe ‘14 states, “ I think second semester is going to be extremely hard, maybe even harder than first semester.”

Clare Carney ‘14 agrees with McAulliffe but thinks the students will have a different attitude.

“Teachers won’t let up on the work, but its up to each student if they want to slack or not,” states Carney.

Second semester is jam packed with events such as Catholic Schools Week, House Week, Spring Break, and Prom for the Upperclassmen. Specific to the seniors, we have Skip Day, the senior production and of course graduation to look forward to.

As an underclassman, when the seniors graduated, you never thought that day would come. But now as a senior beginning second semester, I realize that the rest of the year will go by even faster. Now, especially, is the time to make a point to take it all in.