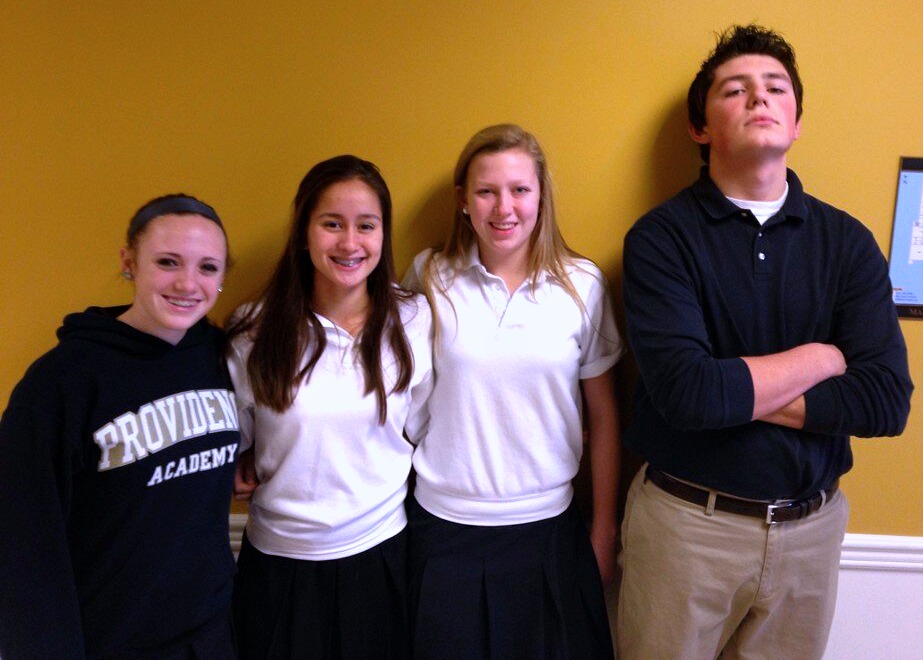 With the basketball season now in full swing, we talked to a few top freshman athletes who play on varsity. Gavin Blomberg ’17, Ashely Servais ’17, Sophie Koeppl ’17 and Taylor Miller ’17 all play for the varsity basketball team at Providence Academy as freshmen.

Blomberg, a 6’4″ new student at Providence, talked about his basketball career so far. Blomberg commented on what it is like playing with older players.

He loves the game of basketball, along with his favorite player Chris “Birdman” Andersen, of whom he sculpts his play after. Blomberg came from Wayzata and has been playing ever since Kindergarden. In the past, Blomberg has played for Wayzata, Maple Grove and during the AAU season, 43 Hoops.

“Yeah, it’s hard at times, but not a huge challenge,” said Blomberg about balancing a varsity sport and school. Along with basketball, he played and lettered in varsity football for Providence this fall.

Another freshman playing varsity basketball is Miller who plays swing, which is both JV and varsity. She is new to PA this year, coming from Holy Family, and has been playing basketball ever since 3rd grade. Miller has played varsity basketball before, for Chesterton’s varsity squad as a 8th grader.

“The difficulty level was probably in between the JV and Varsity level, here, at Providence,” said Miller when commenting on the difficulty of her previous years of basketball compared to this year’s at Providence.

“Playing with older teammates pushes me to do the very best I can,” said Miller. “I know that if I work hard enough, I could be at their same level so that is my motivator.”

Servais also plays swing. She has been playing basketball for the school ever since 8th grade, but her freshman year is the first that she’s played JV/Varsity. Servais also played for Wayzata from 5th through 8th grade. She commented on the level of competition on varsity compared to JV saying, “I’m currently playing swing, so I experience both. The varsity level is much more intense, and the players are stronger, bigger, and smarter.”

She also plays soccer, which she lettered in this year along with track. Servais, when talking about balancing school work and sports, says, “It’s doable, but definitely not easy. Especially on a night with an away game!”

The last freshman playing varsity basketball is Koeppl. Another new student at Providence, Keoppl in previous years has attended Benilde St. Margaret’s, where she played both freshman and JV basketball.

“Balancing school and sports is sometimes challenging with the time to finish the assignment, but it is a great way to learn how to balance activities in preparation for college,” said Keoppl.

She has been playing at a high level of basketball for quite some time. Keoppl says, “I have played at the AAU level since 4th grade so I have been playing at pretty high intensity levels, but playing varsity is a new experience that I am grateful to participate in.”