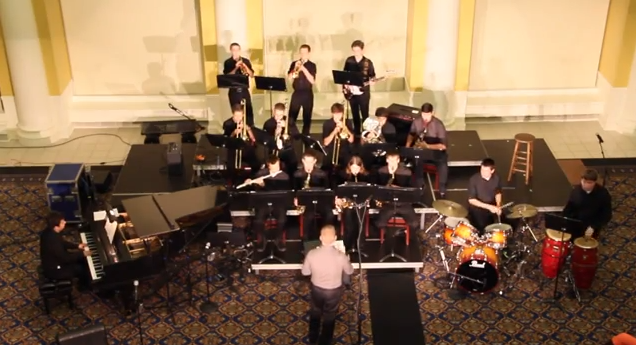 One of the many electives at PA is band. Band meets four times a week, but for some students, they want to do more. A number of students participate in Jazz Band. Jazz Band is a group of boys and girls that meet in the morning.

And, to put it simply, they play. Mr. Thomas Jones is the Upper School Band Director and also a key  part of the Jazz Band.

“My role as Upper School Instrumental Director is to recruit musicians, select literature, and organize and facilitate rehearsals,” said Mr. Jones. “I also perform with the group from time to time on various instruments.  What can I say? Playing in the Jazz Band is fun, even for an old guy!”

Although the band is well rehearsed, they do not practice very often.

The jazz band was the opening act for this year’s fall coffee house.

“We perform at all Coffee House events, the Gala, the winter and spring band concerts, and select PA special events,” said Mr. Jones.

The Jazz Band has existed almost as long as Providence has been around.

“The PA Jazz Band has been around for seven years,” said Mr. Jones. “It has always been a volunteer group lead by the Upper School Band Director.”

If anyone is interested in joining Jazz Band, they must already be part of the Symphonic Band. If anyone used to play in Band and would like to play with the Jazz Band, Mr. Jones encourages you to email him or stop by his office.

This is the Jazz Band performing at the 2013 Fall Coffee House: