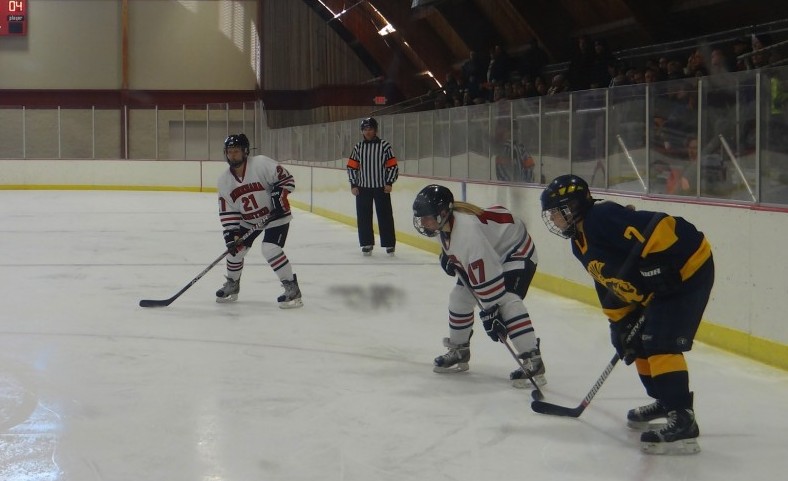 Providence Girls’ Hockey team, a co-op with other metro area schools, doesn’t have a win in the record books yet, but the team is hopeful about the overall success of the rest of the season.

The team has played seven games, putting them about halfway through the season.

“We haven’t scored any goals yet,” said Ellie Schneider ‘17, a first-year member of the varsity team. “I was so close last night, but the goalie saved it at the last second.”

Schneider is one of four Providence Academy girls who play in the co-op with girls from Minnehaha Academy, DeLasalle, and St. Agnes. The other PA girls’ hockey players, who all made the varsity team this year, are Lily Johnson ‘15, Hailey Wheeler ‘16, and Elsa Deinema ‘17.

The girls travel to the Minnehaha Academy arena every day after school for practice, getting out of school 15 minutes early on Mondays and Wednesdays for the trek.

“It’s very high energy and the girls are very nice,” Schneider said of co-oping with other schools. “You have to learn to make new friends, but it’s not that hard.”

Schneider said the team is working to improve their current record, and are optimistic about the rest of the season. The teams’ next game is Tuesday, December 17th at 7 pm at the Minnehaha Arena.