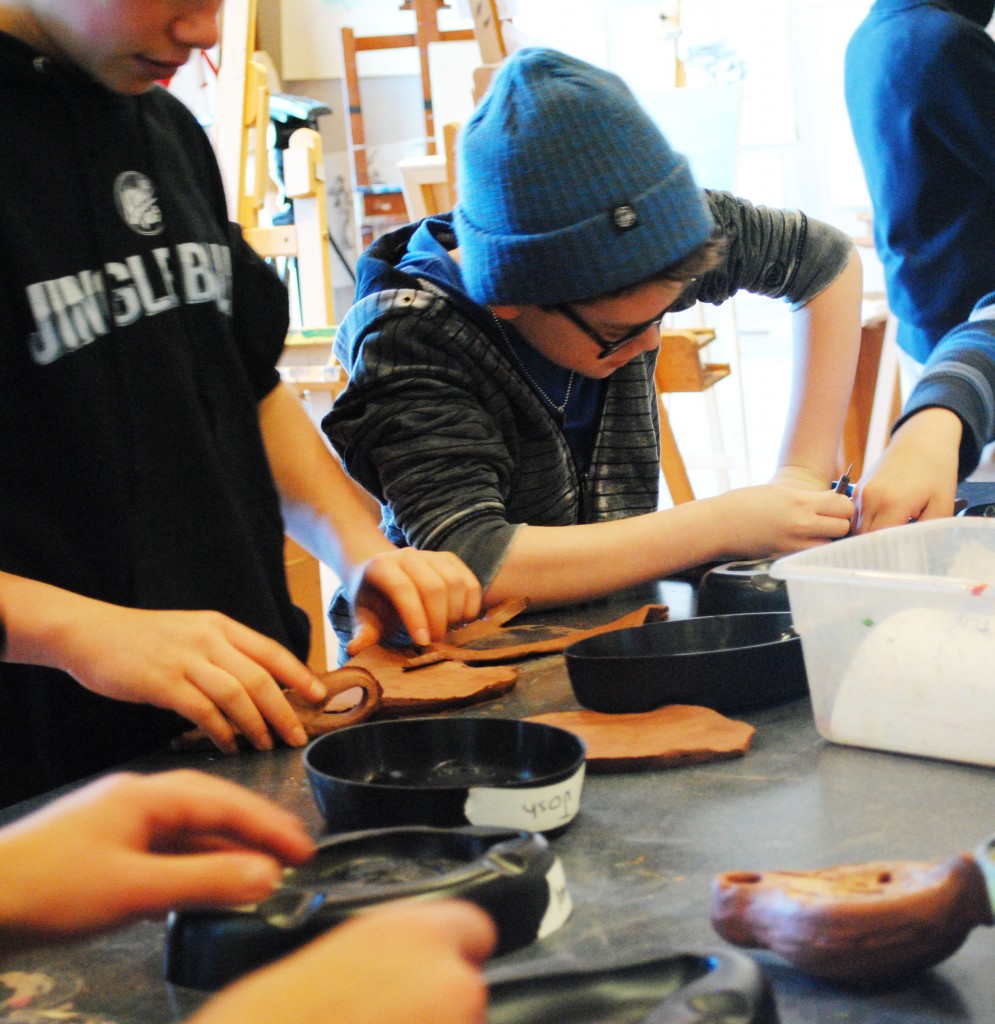 Most of the artifacts in PA’s ancient artifact gallery sit untouched behind glass cases for the entirety of the school year, the only contact with students being a casual glance on the way down to lunch or the occasional class “field trip” to look at a particular object. But on Wednesday December 11th, PA juniors and senior art students got to know one particular artifact in a more intimate manner as they partnered with students from Heilicher Minneapolis Jewish Day School to create replicas of a clay ancient oil lamp.

This particular lamp, dating from 300 AD, was recently acquired by PA board member Mr. Bob Cummins, along with the original stone casting of the lamp that was used thousands of years ago to make the lamp.

“Mr. Cummins got the mold digitally scanned,” said Maggie Morgan ‘14, one of the Providence students working on the project. Students then used plastic recreations of the mold to make their own replicas of the original lamp in clay, using similar techniques to the ancient methods.

PA juniors and seniors in the light blue period Studio Art III & IV class made practice replicas of the lamps last week, and then were joined by eight grade students at Heilicher Minneapolis Jewish Day School this week for the partnered project.

Students and teachers from both schools, plus NET team members and a KARE 11 news crew crowded into the art studio on Wednesday, with students from both schools splitting into groups at the art studio’s tables. The event started with an introduction by Mr. Robert Portnoe, the Jewish Development Director at HMJDS, who explained the history of the oil lamp as well as its cultural significance, especially regarding the ancient celebrations of Hanukkah. Then PA’s Mr. Christopher Santer gave artistic guidance for the project, demonstrating the techniques each student should use to recreate the lamps, and then setting the students loose to work on their own. PA juniors and seniors, who had experience making their “practice lamps”, guided the HMJDS eighth-graders who were making the lamps for the first time.

“We’ve made the lamps before,” said Jenny Walz ‘14, “but we’ve never done this,” she said as she gestured to the crowded table before her.

“I really like that we’re able to do this,” said Sarah Green ‘18, an HMJDS student.

To make the replica lamps, the students cut two ovals out of clay slabs, then pressed the clay into the molds to form the top and bottom halves of the lamp. Next week, the Providence students will travel to HMJDS to finish the project. They will work in their student groups to join the two halves of the clay lamps, which will be fired later for each student to keep.

On this day the students will also get to take the practice lamps made last week, fill them with oil, and place a wick in them to see how they work.

“I think it’s really cool to get to see what other schools look like, coming from such a small environment like my school,” said Ellery D. ‘18, from HMJDS, “and it’s fun to get to meet new people.”