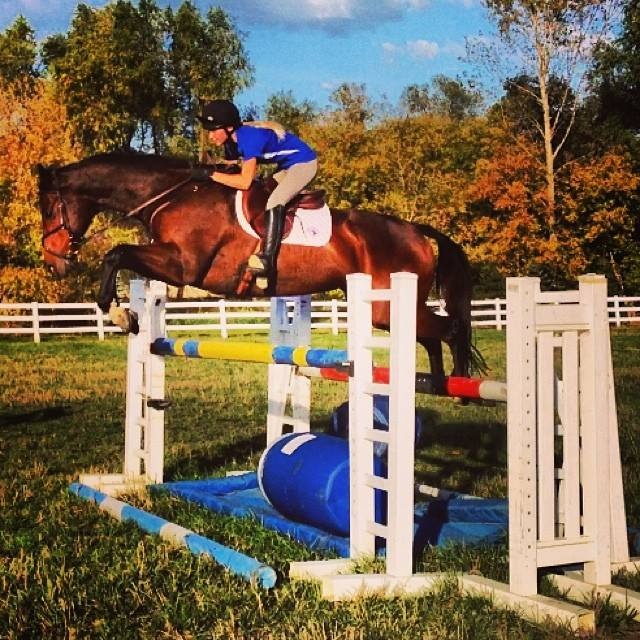 Samantha Kelly ’16  is currently making a name for herself on the national level in the riding world. Kelly trains every day, competes around the country, and racks up awards for her horseback riding abilities.

“I am an eventer, which is a discipline within riding,” Kelly said. Eventing involves an intense three-day competition. The first day of competition is Dressage, where a horse and rider perform a series of predetermined movements from memory.

“The easiest way to explain it is dancing on a horse,” Kelly laughs.

The second day is Cross Country, which is the most challenging and technical of the events. Cross Country is an event where horse and rider must jump solid obstacles (12-20 of them) in a large field, sometimes involving combinations of jumps, all while running as fast as possible to finish the course within the prescribed time limits. Points are deducted for missing jumps or for each second the horse and rider go over the time limit.

“This is the most dangerous phase,” said Kelly.

The third day is Show Jumping, which, according to Kelly, “is what most people think of when they think of jumping horses.” Show jumping tests the technical skills of riders, with riders jumping over collapsible obstacles in a show ring. The jumps are at different heights depending on what level the rider is, and like Cross Country the event has a time limit.

After three days of competition, judges total up the scores from each event to give a rider a final score.

Kelly has been riding horses since she was 5 years old. She trains her competition horse every day and her additional horse every other day. She travels often for competitions, competing almost every week from the summer through November.

“As my friends know, I’m not here at all during the summer, and gone a lot for school,” Kelly said. “I travel all over the country with my horse competing.”

The intense training schedule and time Kelly puts into her sport has paid off during competitions. She’s won many ribbons, including for getting the best score out of 160 riders at a show in Illinois.

“I’ve also placed 7th in my level out of the whole country, and at dressage shows I’ve won Champion and Reserve Champion,” she said.

This year so far, Kelly has won four shows in Wisconsin, Illinois, Michigan, and Minnesota, has won money twice, and placed 3rd at Champs in Texas out of 50 riders.

“My future goal is to qualify for Young Riders or Junior Olympics next year in Lexington, Kentucky!” she said. “My favorite part of riding is probably all the people I get to meet and being able to dedicate my life to something so much, and love it so much.”