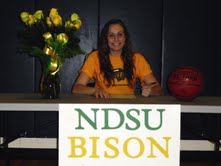 “I have dreamed about this since 5th grade. I never thought I would be a college basketball player,” states Happke.

Although the outcome was profitable for Happke, the college recruiting process is a long and hard one. Most recruiting happens in AAU (Amateur Athletic Union) basketball, which is during the spring after the high school season concludes. Participants in AUU basketball generally play at a high level, with the intent to play in college.

Coaches do their recruiting at AUU tournaments because it’s easier to see the top players grouped together. Hapkke remembers when the coaches for NDSU watched her play for the first time.

“I was in Iowa at a tournament” said Happke. “At first I was nervous but they’re not just looking for scorers. They look to see if you’re a team player, and whatever else you have to offer.”

From that point, Happke started receiving letters from colleges, and her coach was contacted.

Happke states, “North Dakota State University and Loyola Chicago were my top two schools. Over MEA break my junior year, I made a verbal commitment to NDSU.”

Although a verbal commitment is non-binding, Happke kept her word and made it official on November 13th.

“I loved the coaches and the the campus,” said Happke. “The town the campus is in feels just like my hometown Coon Rapids. It’s all about where I felt most comfortable.”

On June 9th, just nine days after graduation, Happke departs for college. Team training for the upcoming season begins in the summer.

“I will miss all of my friends so much. I will try and come to as many grad parties as possible,” states Happke.

Even though Happke’s future is set for this summer, her last season with the Providence basketball program is just starting.

“Providence basketball has developed me into the person I am today. It has taught me to be tough, humble and realize how blessed I am,” states Happke. “I want to make it to State with my girls.”

One Reply to “McKenna Happke ’14 commits to NDSU”