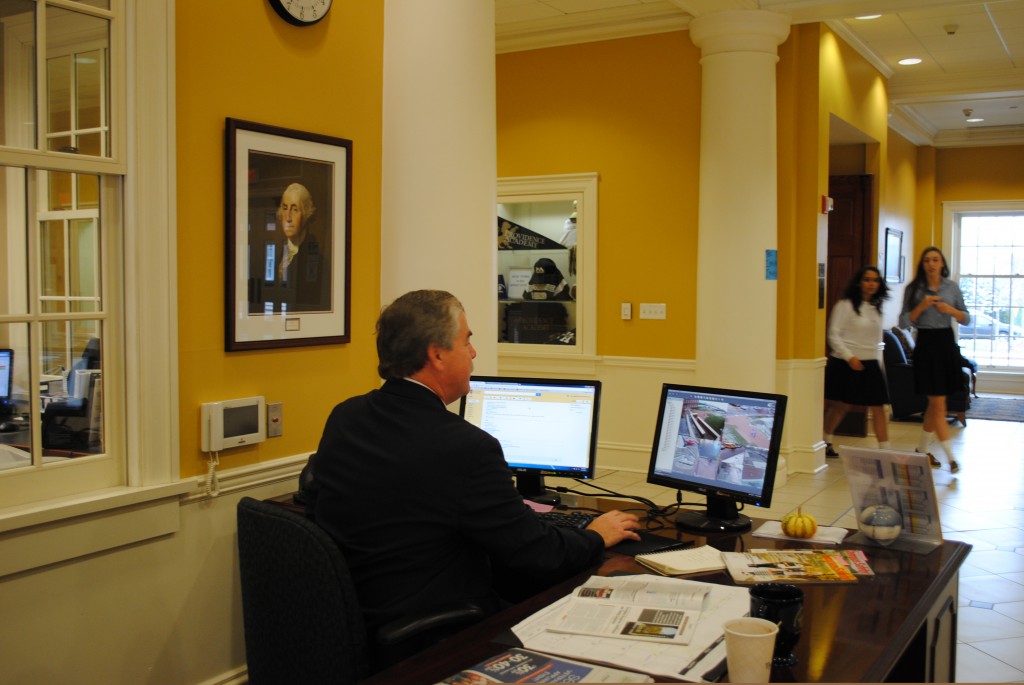 This year, Providence Academy introduced several new  features to improve the security of the school, and more will likely be on the way.

Officer Tim Oie, one of two former police officers often seen conducting traffic in the morning (along with Officer Dale Duerkson) now staffs the welcome desk and monitors various security cameras on a monitor there.

The 27-camera, web-based system itself is new, replacing an outdated system.

“It was so old, you couldn’t see anything,” said Officer Oie.

The school also invested in two new improvements to classroom doors. The first of these is a red-and-white magnet that stays on the inside of every classroom door frame. Before, in the case of a lock down emergency, teachers would have had to go out into the hallway to lock the door from the outside.

“Now, all they have to do is pull the magnet,” said Officer Oie. He also noted that there have been no incidents of students stealing the magnets. The second feature is a transparent “safety film” on all the classroom doors. This causes breaking the glass to take longer.

Despite securing all regular classrooms, to secure some doors like the chapel and multipurpose room entrances still poses a challenge for several reasons (such as that a teacher would not have the master key).

Officer Oie said he thought these changes would happen by Christmas. “We’re trying to be proactive,” he said.

Also, though an invisible change to the building’s security, the front doors now remain locked, meaning that the officer at the welcome desk must hit a button to allow “familiar” people to enter. Visitors must also now sign in and get a sticker, which he said, for some parents, has been “a bit of a challenge.”

Last March, Officer Oie and Officer Duerkson made recommendations to the school administration for the updates. Some of the funding came from a Fund a Need campaign at the last annual Spring Gala in April.

“Providence Academy, because of its religious affiliation, sometimes becomes a target just because of what we stand for,” said Officer Oie. “Does that make us a more likely target? It doesn’t make it any easier.”