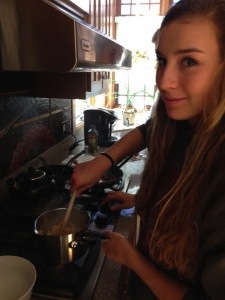 Hungry? Students at PA have found the solution. This year, Colleen Irwin ‘14 and several of her friends started a new club to creatively satisfy those pesky cravings: Cooking Club.

Cooking Club was born out of the boredom of a group of senior girls who were looking for something to do one day, Irwin explains. “We just decided to cook,” she said.

The first meal was improvised and simple: potstickers, biscuits, and blueberry pie. Now, the club meets at a member’s house one weekend a month and the meals have become much more planned out.

“It is really exciting to see how much we’ve grown in our menu planning over the past two years,” Irwin said. “Our last meal was much more cohesive and well rounded. It was a tomato tart, a summer noodle salad, grilled shrimp with arugula pesto, and grilled peaches with vanilla bean ice cream for dessert.”

On club meeting days, the ladies of the club take most of the day to plan the meal, go grocery shopping and cook. Finally, they reward themselves with the 3-4 course dinner they prepared in the evening. Past menu choices have included goat cheese ravioli, calzones, butternut squash soup, chocolate crepe cake, raspberry tarts, and much more.

“We always try to start with completely new recipes that none of us have tried before,” said Irwin, and the club also strives to make everything from scratch.

Paige McAuliffe ‘14, a current member of the club, says the variety of the menu is one of her favorite things about Cooking Club.

“I love Cooking Club because I love food!” she said.

Currently, the group is comprised of about a dozen senior and junior girls, but as Irwin says, “We are always looking for new members!”

Besides founding and participating in Cooking Club, Irwin celebrates her love for food in a variety of outlets. She applied to two different culinary schools for college, and says she would eventually like to go into food research and development, finding ways to make organic and natural food more accessible to the general population. In addition, Irwin has developed a habit of baking food for her friends’ birthdays.

“I don’t get the chance to bake sweets very often because I never want to eat them all by myself,” she said. “So whenever I get the chance to share, I take advantage of it. I also think that people really appreciate the thought that goes into making something rather than just picking up a gift card or a random gift.”

Irwin brought this appreciation of food with her in the founding of Cooking Club, saying that her favorite part of the club is the opportunity she has to share her love of food with others.

“Food has a way of bringing people together unlike anything else,” Irwin said. “Cooking Club has strengthened friendships and fostered a community of healthy living among PA students. It has really helped me understand how to relate to others through a common ingredient in our lives: food.” 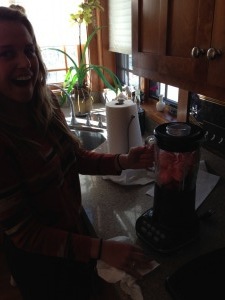 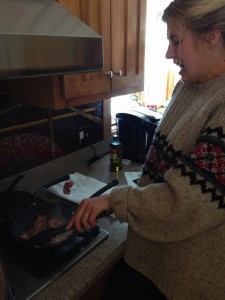