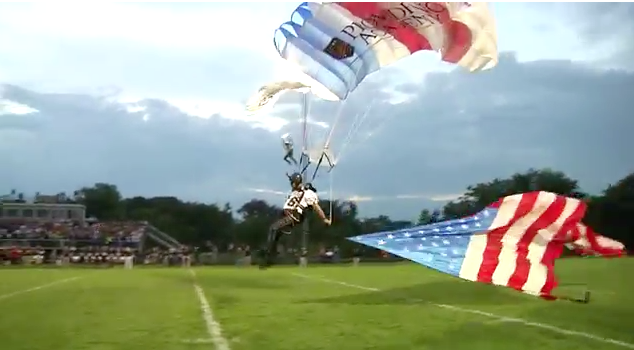 The calls started on the south side of the football field, as the choir was preparing to sing the National Anthem just before the start of the Homecoming game. Two dark shapes emerged out of the sky, spiraling towards Providence Academy. Then two became three, as the leftmost smudge split and became two distinct shapes carrying something between them. 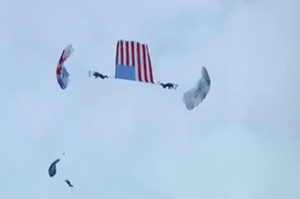 Soon, PA Headmaster Dr. Todd Flanders’ “Homecoming surprise” was clear. Three skydivers looped around PA’s field, over the crowds of stunned fans, and landed gracefully in the middle of the pitch carrying the American flag, all to the background of PA’s Upper School Choir singing the Star Spangled Banner. As the final notes of the anthem faded, the announcer introduced and thanked the three US Navy SEALs who had delivered the flag in a show of patriotism.

“I was singing the national anthem with the choir so I couldn’t see them come down, but I saw them land and it was really touching,” said Rebecca Dykhoff ’14. 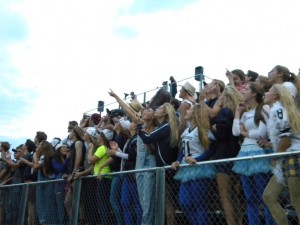 The SEALs, Isaiah Maring, Eric Skraby, and Justin Gonzales, were no strangers to skydiving, as they had a combined total of 11,000 jumps between the three of them. And surprisingly, this wasn’t the first time they’d made an appearance at a high school homecoming game either. In an exclusive interview for The PAW just minutes after landing on PA’s football field, they said they did a similar stunt at a San Diego homecoming a few years ago.

“But this was our favorite jump yet,” Gonzales laughed afterwards.

The SEALs said that the “wind was a little brisk” for the Providence jump, but otherwise conditions were good. The jump went smoothly, even though the process of a stunt like this is complicated. It all happens “in a matter of seconds,” said Maring. The divers jumped out safely, then Maring smashed into another diver’s back with his canopy and the two hooked up the American flag in midair.

“Being strapped to somebody else by the tether is extremely dangerous,” said Maring.

“It’s probably the most dangerous thing you can do while skydiving,” agreed Gonzales. 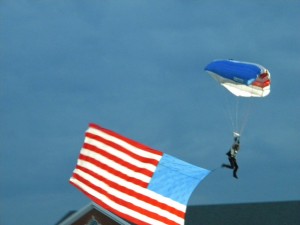 The well-received homecoming surprise had been instigated by several PA parents and the help of the administration. Mrs. Mary Mithun, a PA parent, had been taking classes at Sealed Mindset, which is a program with “retired SEALs teaching [people] how to protect themselves,” she said, along with some other PA parents.

“They invited us to go jump out of an airplane at the end of August. It was terrifying but at the same time it was really exciting to have done that,” said Mrs. Mathun.

“They’re very, very brave guys,” she said. “Today’s jump was the most dangerous kind of jump you could do. They made it so that if one of them became tangled they would all be in a bad spot. But they loved being here. There were a lot of people that they knew because they had worked together at Sealed Mindset,” she explained.

She even hinted that “they’d love to create a junior SEALs program” to teach PA boys about honor and duty.

(Lila Anderson contributed to the reporting of this story.) 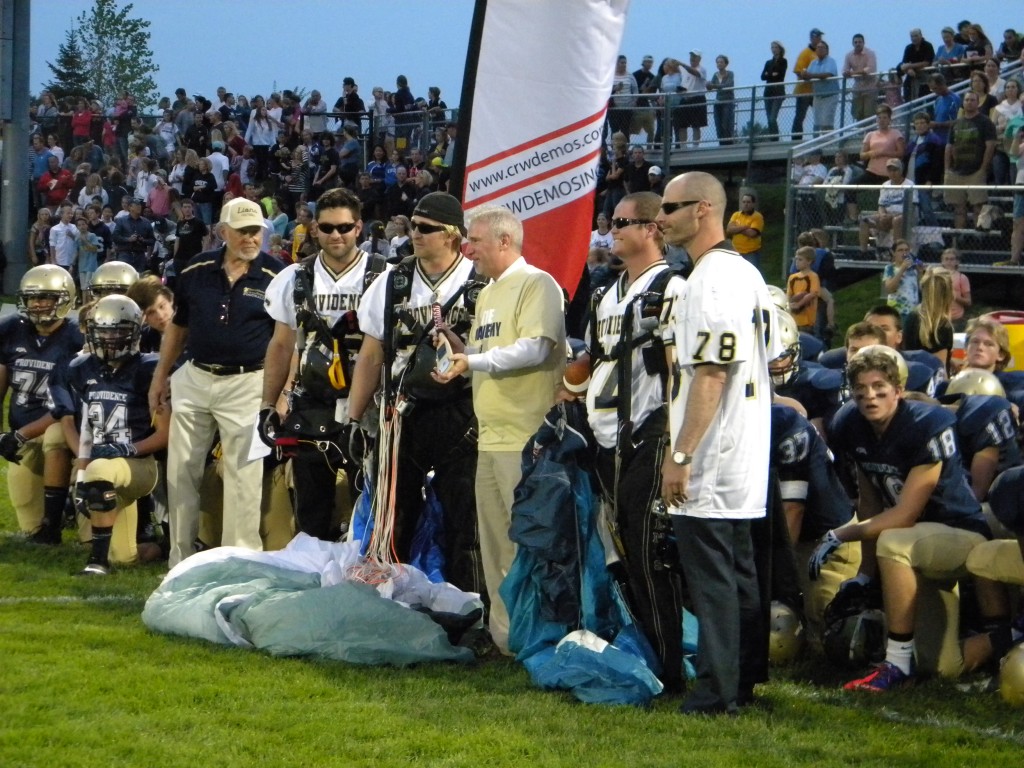 One Reply to “Navy SEAL stunt kicks off Homecoming ’13 game”